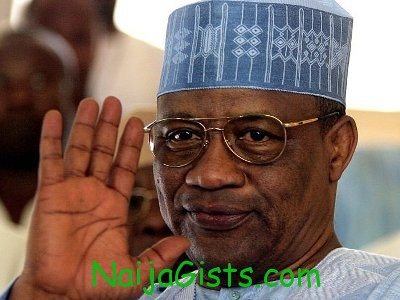 General Ibrahim Babangida, IBB is something of an expert in struggling to remain in the eyes of the media. naijagists.com

And this whole struggle is aimed at one thing: legacy. He was recently quoted as saying, “You won’t have IBB to kick around again” while alluding to his decision to quit partisan politics. But that wasn’t the first time he was “quitting”.

He quits whenever he foresees impossibility in his quest for ascension. Forget that denial and just juggle before him the opportunity to fly the PDP ticket and watch him recant his I-am-an-old-man flimflam.

Many years before now, (few years after he was forced out of office) IBB’s quest for a political comeback was driven strictly by his super-tanker-size ambition, but his quest for it today is about legacy. I have often said that Babangida is interested in rewriting his checkered history. Nearing old age and anticipating a nearby entrance into life’s departure lounge, the General wanted to have access to the presidency so as to be able to swiftly change the overwhelming perception of him as the architect of modern day corruption in Nigeria.

Unable to achieve his dream, yet, of being allowed to show penance from the throne where he erected his alter of transgressions, and having seen the signs that the opportunity may have slipped away forever, Mr. Babangida plans a new approach. He wants to write his memoirs. Every now and then, we get hints of his plan to do this.

Needless to say, memoirs are published to tell the world the author’s version of his stories. For a ruler in the mould of IBB, it will offer him the opportunity to correct what he might consider past misjudgments, misrepresentations and misconceptions. I also imagine he’ll want to give it a wide publicity to reach as many people as possible, all in a bid to be judged, in the final analysis, the saint rather than the villain he is. But that will not fly.

IBB’s protracted battle to get a fair verdict by history should serve a lasting lesson to every Nigerian ruler. History of any ruler or leader (by now you would have observed my reluctance to address any of the contributors to the Nigerian malady as ‘leader’) is actually written while in office, by the ruler himself, through his actions and/or inactions. It is not written while out of office. What is written out of office is more of what the ruler did –or didn’t do – when out of office. IBB wrote his memoirs between 1985 and 1993. And every one of us has a soft copy of that in our hearts. Although I was too little to know when he wrote the first chapter, which is his palace coup that toppled General Buhari’s regime (the soft copy in my heart has this as its first Chapter), I had become conscious enough to see him write the contents of the last Chapter –except he writes the new one I am about to propose –which was that he left Nigeria in a state of maximum entropy; where evil bloomed and all our values totally destroyed.

The people who were born the year IBB concluded his 8-year memoirs are teenagers today. They weren’t there when Dele Giwa died, but they have read tons of articles on how IBB’s government refused to find those behind the gruesome murder of the frontline journalist. They have heard stories of – and read essays on – how Mamman Vatsa, Babangida’s wedding best man and a professional colleague was executed by a regime which Commander-in-chief IBB was. They also have heard how scores of Nigerians died from the chaos that set in after Mr Babangida annulled the 1993 presidential election that saw the Late M.K.O Abiola emerge winner. Without risking being accused of over flogging the June 12 story, I dare push ahead with a repetition of the reports from both local and international observers – and commentators – that the election was, and still remains, the most credible election held in this clime.

He must have been alarmed at the rate at which corruption, the institution he built, has grown in leaps and bounds in just 19 years. He must have been reading news of how people steal billions effortlessly in government without facing any risk of being jailed. We also see the same thing, and are even more alarmed than IBB. We only know its origin. We have read stories of how it was watered by IBB.

Seventy percent of the people he is targeting to read his memoirs are 35 years or less, and more than half of them are less in age than half the age of IBB himself; yet he planned no future for them while he ruled and reigned. In millions, these young people are jobless, and even higher millions of them do not have access to good education; yet his own children, last of whom is part of the Nigerian less-than-thirty-five-years population, had the best education in the world and live in opulence from wealth not acquired through building and running a successful world-class corporation, but by plain accessing, in an unfettered manner, our national treasury.

I would advise the General to save himself the Labour of scribbling down lines that may end up in just his library, those of his equally stupendously wealthy coterie of friends and allies –who he shared the Nigerian wealth with – as well as the shelves of big bookshops. The memoirs will not be read by 99.99% of Nigerians who feel, and rightly so, no need to own two copies of the same book. If the new memoirs is coming as a newly edited version of the soft copy in our minds and heads, we suspect the truths in the copies we have may have been deleted and replaced with falsehood. This is part of the reasons we will not bother ourselves with the new copy. It will be doctored.

Yet Mr Babangida can get our attention. We’ll want to read something new if we hear today that IBB has come up with the details of how himself and his friends mismanaged the Gulf War Oil windfall. We will be interested in having him explain to us how he became the first billionaire former Head of State and set bad example for the rest after him. Was it the savings from his salary as a general and “President”? Which business was he running before he became the Head of State to justify such volume of wealth? Did he win lottery? Was he a football star in the mould of Lionel Messi, Christiano Ronaldo and Samuel Eto’o? Was he into international wrestling? Was Babangida a basketball star playing in the NBA? We are curious. We want to know.

There are reports of Babangida’s expansive estates in Alexandria Egypt, as well as his secret ownership of substantial shares in Julius Berger Nigeria. There are others of his stakes in Globacom and, of course, his major roles in the Oil and Gas sector –judging by Professor Tam David-West’s revelations, late last year, on how all the President’s after Buhari became oil dealers. These reports form parts of the contents of the soft copies of the memoirs of IBB we already have. We see no reason to believe the usual refutation that will be coming in this doctored memoir. We see his lifestyle. We see the way he flaunts the wealth. No story of ‘I am not wealthy’ will sell. IBB must understand this.

At 71, with rich children, several investments and heavy bank accounts in all the known strong international currencies, IBB has just one last opportunity to add the very last chapter to the original memoir, not the one he wants to write. Let him return Nigeria’s resources to Nigeria! At the departure lounge, he must bear in mind that there are neither real estates nor Oil and Gas businesses to buy in the world hereafter. There won’t be any need to erect a hilltop mansion, neither will he need some set of Arabian settees. No human needs a dime while leaving this life. I strongly recommend that Mr IBB returns 90% of all that he took from us and keep the rest to tend to his old age. He should include in what he wants to return his interests in all the known and unknown companies with which he warehoused the ill-gotten money. On surrendering the wealth to President Jonathan – who, by the way, is writing his own memoirs at the moment –he should advise him against stealing of public funds and state-protection of corruption. He should open the eyes of the President to the vanity of desire and the transience of power. IBB, in that sober moment of making restitution, should enjoin the president to be the Nigerian president and not an Ijaw man who is ruling Nigeria. He should call the attention of the president to the danger of leaving the nation’s youths uneducated and leaving the poor uncared for while government officials cart away bulk of the nation’s resources both legally and illegally.

Babangida has seen it all, and any advice he gives during or after the time he returns our billions will not be seen by any Nigerian as a cheap talk to score some political point; it will be viewed seriously. Mr IBB has the opportunity to do this.

And lest I forget, while submitting the money, Ibrahim Babangida should warn the present administration sternly on the consequences of not using the money to lift the citizens from poverty and disease. He should call their attention to the pains of a supposed leader in retirement watching kids who should be eternally grateful to him for empowering them hiss in disgust each time his name is mentioned. He should teach the president that in the end, long after the praises of sycophants have waned into oblivion, the ruler is left to the verdict of his conscience.

This is the only act that would cause us to, first, update the memoirs in our hearts, and secondly seek to lay our hands on the hard copy Mr Babangida will be publishing to make sure this final chapter was captured properly.

And if his Excellency wouldn’t mind, I would like to propose a title for this all important chapter of his memoir. (‘In Tears, I Returned It All’, Written by C. C. Ekeke)