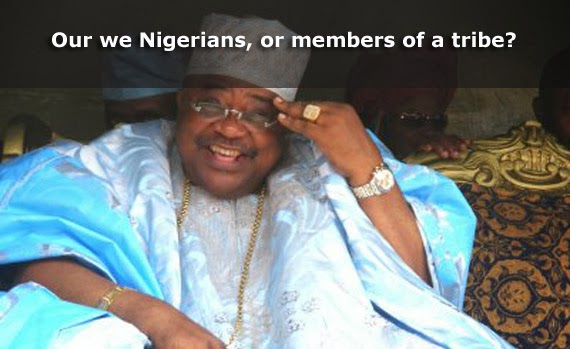 Oct 21, 2013 – The Menace Of Tribalism & Racial Discrimination In Nigeria: Why The Igbos Will Never Trust The Yorubas Again & Vice Versa

Racism and ethnicism serve the same purpose: that of bias in favour of their kind. The only difference is that racism is more associated with colour ( ie white, black and so on ); ethnicism deals with the ethnic and cultural roots.

Ideally, one will not be writing about racism in Nigeria where we all have a uniform black color but a personal experience a few years back in Port Harcourt make this imperative.

I represented my company as the manager covering the Eastern Region operations. My brother and childhood friend, Captain Austin Anianu, was in Port Harcourt for an overnight stop and we needed a place to chill out.

Somebody suggested that we go to FRIENDS nite club, as at then located along the water line area of aba road. We were an entourage of four people. When we got to the gate we were refused entry, tried as we could to gain entrance. Meanwhile, every White man that came along was allowed immediate access.

I finally managed to find my way inside a few months later through a friend named Flemming, and what did I find inside? A Nigerian club where girls in a cage-like stage dancing to an all-White audience. It was like a ram market, the ram in this instance being our Nigerian girls. It left a sour taste in my mouth.

We also impose racism upon ourselves. When you reason that one colour is better than the other, you are thinking racism. In some parts of this country, we have fellow Nigerians who have successfully completed their education in core areas of professionalism and having completed their compulsory service to the nation, are refused employment on the basis of state of origin.

Preferences are giving to white skinned men from countries like India, Lebanon, China and the likes, even when such jobs do not require much skills. Some of our captains of industry still practise this in their respective firms. So you find White men working in areas that we have abundance of jobless qualified Nigerians.

The issue of ethnicity in Nigeria is a matter of great concern; instead of uniting, Nigeria is breaking further into fragments and every major action taken by government now has ethnic colouration. It is an irony that the British have managed our differences better than our indigenous leaders. Then, we had one united North, no tribal and religious colorations and that was how the North fought the civil war. The same way the South was a united body under Herbert Macaulay and later Nnamdi Azikiwe as leaders of the NCNC party.

Unfortunately, ethnic politics gained national prominence when the Yorubas of the South West under Obafemi Awolowo initiated a carpet crossing along tribal lines on the floor of the Western House of Assembly and Azikiwe was forced to go to his kinsmen in the South East to rule as an ethnic regional leader.

Now, what were the political consequences of this action? The cord of unity amongst the Nigerian ethnic nations was broken; the Igbo man will never trust the Yoruba man again and likewise the Yoruba cannot trust Igbos. This animosity between the two major tribes of the South paved the way for a total Northern dominance of the political landscape.

However, with the increasing demands for political autonomy and resource control by minority tribes led by the late Saro Wiwa’s Ogoni people, followed by the Ijaws and other South-South ethnic stocks, the ethnic struggles assumed a different dimension. From the Northern end, splinters were beginning to emerge in the middle belt and areas occupied by the minority Christian population.

What is the impact of this ethnic consciousness? Every ethnic group that has their man in power, sees it as an opportunity to feather their tribal nest. It got to its height during the military era, that such heavy decisions as state creation and location of state capitals were done at the whims of one man, the man in power. It affected the allocation of resources, offices, boundary adjustments,promotions, admission to schools, job recruitments and so on. People were no longer given positions based on merit; so you find across the land a generally dissatisfied populace. Those who have the means to sophisticated weapons resorted to militancy and coup plotting, while those who could not remained subdued.

This was the situation until the civilians came in 1999. Unfortunately, the Obasanjo regime carried on with the baggage. It is a matter for concern that 53 years after independence the country is still grappling with the issue of ethnicity. There is no unity of thought and every line of reasoning is tainted with ethnic and religious bias. That is why the Jos crises have remained unsolved till date,and such other ethnic crises all over the land. That is why civilised, sophisticated and enlightened individuals cannot reach reasonable consensus over a book written by the late Chinua Achebe. That is why, the Arewa Consultative Forum, ACF, cannot agree with the Jonathan supporters over 2015. The political debates are no longer on performance but on whose turn is next. That is why the Rivers and Bayelsa states are in conflict over oil rich territories. That is why the Lagos/Anambra repatriation face-off escalated to the extent it did; and that is why the composition of Federal appointments from the South-South region focuses mainly on people from Jonathan’s Ijaw ethnic stock. Are there no other tribes in the South-South apart from the Ijaws? The examples are endless.

Having highlighted the above, let us now grapple with the solutions. We must know that over time culture is dynamic and this affects the laws, mores and customs of the land. This is made possible by contact with people of other races and cultures; in the process, bad customs and practices are jettisoned. For example, in the present day Igbo land, the Osu caste system is no longer as pronounced as it used to be.

What is bad is bad, customs that cannot guarantee access to basic human rights of the people must be abolished. It has been so over time and society has always tilted towards the good laws and customs.

It behoves on the government, therefore, to intensify efforts on the education and proper sensitisation of the citizens, for an educated society is a liberated society.

For the above to be possible, we will require the right leadership. This should be the focus of the political parties. Appoint or elect capable men and women at all levels that can move the nation forward. Ethnicity cannot be eliminated totally but it can be reduced to a tolerable level, meritocracy is the answer to that.

The issue of settler and indigene is also a source of ethnic crises in the land; it is time for the government to enact laws that will put this issue to rest.

[Article by Sunny Ikhioya from Lagos]