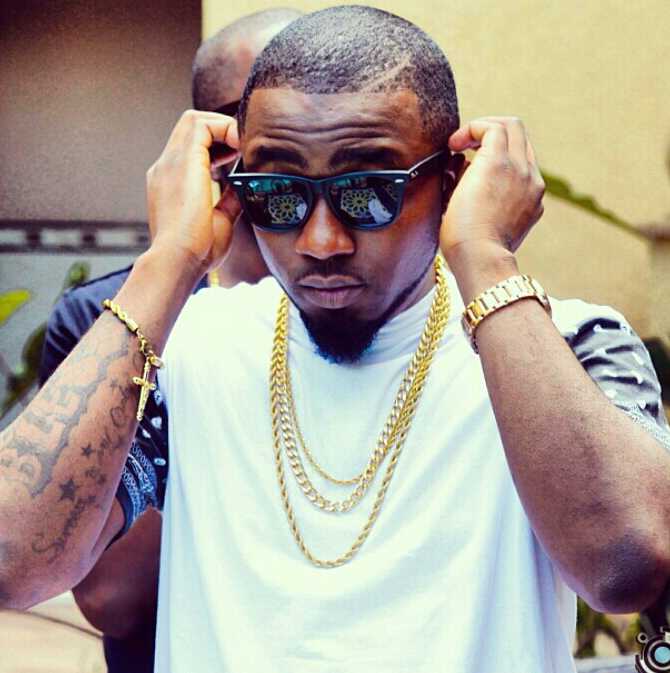 Thanks to his victory at the 2009 Hennessey Artistry where he came tops, Ice Prince has grown to be one of the hottest and most respected rappers in the country. And while it may all look rosy on the outside, Ice Prince has revealed that it’s not been easy after his dad passed away, adding that just like any street kid, he’s had his own fair share of ups and downs, and so fans should not be carried away by the glitz and glamour which has become his trade mark today.

Though, born to upper middle class parents, the Oleku singer insists he was not born with a silver spoon, he and his siblings had all they desired until his dad died in 1999 and life took a dramatic turn!

Dressed in all white designer T-shirt and pants with a muffler dangling around his neck, Ice Prince peered at you from behind designer glasses crested with a fez cap which gave him that clean cut look of an American marine but for his goatee.

“My dad was not a billionaire, neither was he a pauper,” he said arching his bushy eyebrows to drive home his point, “he sent us to good schools and we had vacations outside the country; we were okay but in 1999 I lost him!

“It was a big loss for me and my family. I was 13 and the eldest kid; I had a mum and two younger sisters to look out for and so I had to grow up overnight; thank God for family support.”

Recounting the person of his late dad who was a soldier in the Nigerian Army, Ice Prince described him as a great source of inspiration and like every son would say, his father was a great dad. He said dad went the extra mile to make sure he and his siblings had all they wanted.

“He was a soldier,” he states in his characteristic cool and calm voice, “he taught me everything I know today. My mum was very supportive but she died in 2011, so right now I am an orphan.”

How does it feel losing both parents early in life? “It feels lonely! We were three kids; a boy and two girls and I am the eldest. I became the man of the house after my dad passed on and that has given me a sense of responsibility. It made me grow up overnight!

“I am 27 but my responsibilities are more than that of a 27-year-old. I have to take care of my sisters. I thank God for elevating me. I guess I was called to do this (music).”

According to Ice Prince, he would ever be grateful for the lessons he learnt from his parents, which have gone a long way in shaping him today. He says that while his dad taught him to be responsible right from an early age, his mum taught him to respect women. [Daily Sun]