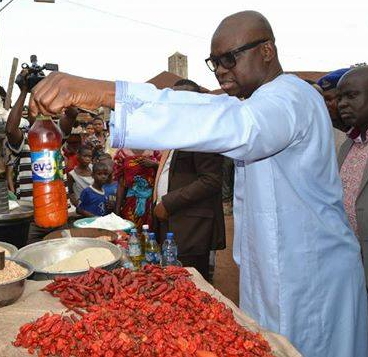 It’s very good that the governor of Ekiti state, Governor Fayose, can take time out from his busy schedule to feed the people of his state, handing out bags of rice and other edibles to the needy as part of his ‘stomach infrastructure’ programme. We all need to eat or we will cease to exist! While his humanitarian efforts, to make sure everybody eats, is highly commendable one ought to point out to the governor that if you feed a man a fish a day you’ll end up feeding him for the rest of his life. Whereas if you teach him how to fish not only will he be able feed himself and his family but others too. Some might say this equates to food- stamps or welfare enjoyed by some in Western nations. But with the current economic climate in Nigeria today it’s an exercise that is neither sustainable nor affordable. Money currently being wasted on the ‘stomach infrastructure’ programme would be better spent on creating employment for the poor he’s currently feeding.

Governor Fayose is an outstanding and outspoken governor in Nigeria and everything he does is commendable. In a country where there is no viable opposition government he has bravely stood up to PMB querying his every policy and move – very few politicians in PDP do this. Recently he took the time and effort to write to the Chinese government to try and block a development loan PMB was trying to negotiate with them. He even went to China himself to try and talk to the government, there, out of helping Nigeria in its dire hour of need.

The Governor and Ekiti state go back a long way to 2003 when he first became governor( and subsequently impeached) to the present day. In the years since he has been at the helm of affairs the state, itself, has barely moved forward. Salaries still remain unpaid, election promises unfulfilled, stories of widespread corruption and election-rigging are still abound.

It’s alright to be a showman if the circumstances are right – feeding the poor, hanging out with market-women, fraternizing with danfo drivers , checking vehicles particulars and admonishing late civil-servants – if you’re an egomaniac, attention seeking person like Donald Trump.

An elected governor of a state is a very busy person and without any doubt I believe the people of Ekiti state would like to see more accountability and less showmanship. Or as the Yorubas would say – ‘ put your home in order first before condemning someone elses’.

It’s alright to criticise the central government (i.e – the Federal Government) if your own house is in order. Charity, they say, begins at home. Progress in the Ekiti state, right now, is rather crawling backwards to the Stone Age rather than forward.

The Office of the Governor of any state is an esteemed position and the incumbent is a servant to the people who voted him into office. It’s a demanding job as the governor is responsible for the well-being of his citizens, upkeep of the state, implementing policies that will benefit the state, not just in the interim but in the future and ensuring there is law and order and accountability. It’s certainly not a platform for one to illegally enrich oneself or become a showman. A governor of a state has to think about the bigger picture instead of resorting to cheap publicity stunts.

So for the aforementioned it’s time to quit the Donald-Trump-Style-Political-Showmanship and get some actual work done! Files must be piling up on his desk by now!