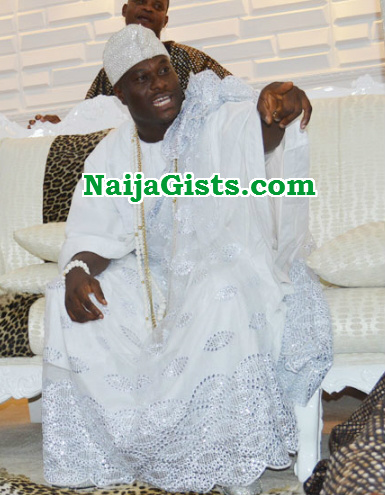 The new Ooni of Ile-Ife, Oba Enitan Ogunwusi, is in dire need of a new palace. Even though it was home to his predecessor, the late Oba Sijuwade, for many years, where people came to pay homage to him, it seems it’s not to the taste of the incumbent. As a result he’s been forced to go on the road to meet his subjects.

You can’t have an Oba that goes ‘waka-waka-about’ all the time. Not only is it disrespectful it’s also sacrilegious. An Obas place is in his palace where people come to greet him and not the other way round.

The title of Ooni of Ile-Ife is highly revered in Yoruba land – unless the true meaning of the Office has been lost in translation – and the holder needs to be seen upholding this. In the olden days when there were countless wars and conflicts across Yoruba land if an Oba left his palace, as often as he does, he wouldn’t have much of a kingdom to come back to for it would have been invaded!

Ile-Ife is the spiritual birthplace of the Yoruba people, the resting place of Oduduwas staff and the chosen Ooni is the custodian of all this. It’s a heritage that has to be maintained with dignity and respect and not trivialized. This is something the preceding fifty Oonis knew and respected.

It’s understandable that Oba Enitan is a young and modern monarch who doesn’t wish to be confined to the four walls of a palace, perhaps because it’s not to his taste or liking. Perhaps the refurbishment of the current palace or building a new one – to his satisfaction – will make him stay there. Everybody goes to visit the Queen of England in Buckingham Palace and if she to found it uninhabitable to receive her subjects she too, probably, would be on the road to meet and greet her subjects, politicians and godfathers.

So the palace seems to be the problem even though it doesn’t seem to be a problem for the many other Obas , rulers and Kings scattered across Nigeria. They are quite happy to stay in their palaces, on their thrones, to discharge their duties as rulers.

One of the requirements for being a traditional ruler, or a King, is to have a palace – and stay in it! Being a ‘mobile-Oba’ is not acceptable. It cheapens the position. If anyone wants to see a King or Oba they go to see him. You can’t have an Oba going round knocking on people’s doors to see them. In doing so he ceases to be a revered one and becomes as common as the rest of us. If he needs to see politicians he must summon them to the palace. Likewise if he wants to party he must hold it in the palace instead of going round to their peoples celebrations. An Oba cannot be a socialite. He’s an Oba who should command respect and have people falling at his feet eager to do his bidding. This however can only be done when he’s in his palace, the seat of his jurisdiction.

So we either build the Ooni a new palace or ‘pimp-up’ the one he’s currently got, making it as comfortable as possible, with all the mod-cons, so he will like it so much he won’t need to venture out as he normally does, knocking on peoples doors to see them.

Continue Reading
You may also like...
Related Topics:adeyeye, ogunwusi, ooni of ife, palace