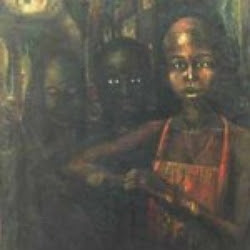 I died in pains. I was in my mummy’s womb for only seven months before the doctor pulled me out. He told mum that I was ready to come out. Perhaps, I was. Or, I wasn’t. But who was he to say I was ready to be born? God?

I was not ready. I was having a swell time with my kindred spirits on the other side. There was peace there. We knew no evil. There was no stealing, envy, corruption and malice. Everyone loved each other. We did not look at skin colour or passports before we played with one another. We only knew that we were spirits about to visit the human world.

And before you visited that world you were given a gift by the king. This gift was to make your mother and father rich.

I was not the regular Ogbanje who comes and goes. I was the type that loved to stay. That changed, however, when I heard I was going into a place called Nigeria. Nigeria? I tried all I could to stay away from the playground when it was rumoured that I would be going to that country. This, I believed, would make the king choose someone else. Yet, He chose me.

I hated the place.

My friends who had gone always came back with deformed bodies and sad tales. My closest friend, Bisi, told me that she died because there was no electricity in one hospital she found herself in. She died from heat. Another friend of mine, Emem, died in one horrible place located in Akwa-ibom. The community and her mummy and daddy killed her. They called her a witch. They said she was the cause of their poverty.

I asked her if she was the cause and she looked at me and wept. Her face was filled with scars and her back showed signs of machete cuts. I held her and told her that everything will be fine but she shed more tears. Crying became her hobby. Nowadays, everyone called her crying beauty. I cannot forget Adamu too. We called him the golden child.

After he visited that country, he came back mad. He was born in a state called Zamfara. He inhaled golden dust and died. It was said that his father and mother worked for an American company dealing in gold production. As the parents worked on the gold mine, Adamu inhaled the dust. When asked about his experience, he laughed. Nothing came out from his mouth. But Adamu’s tale floated around like a heavy balloon. All these made me cringe

I complained to our king. He laughed and said: “ you are already behaving like the people. Complaining and not doing anything about the problem. Hiding instead of facing the challenge. For this behaviour, I will send you to that land to teach you some lessons.” After the king’s declaration, I vowed to come back.

So, I was sent into this young woman’s womb on a sunny Sunday afternoon in one house at Victoria Island. I grew, listened, learned and unlearned. It was while I was reading that I came across this statistics about births in this country. My eyes caught this fact from a magazine my mummy was reading: “Every single day, Nigeria loses about 2,300 under-five year olds and 145 women of childbearing age. This makes the country the second largest contributor to the under–five and maternal mortality rate in the world.” From then, I knew that death was mine. I remembered that my mummy prayed for my case to be different. However, I saw my end.

I reported this case to my king. He replied: “to live is to suffer.” I wanted to correct his statement but I was scared. This was what I wanted to say, “ to be born in Nigeria is to suffer and to live in Nigeria was to die in the suffer.”

On another day, my mother was reading a report from a screen that brings information from the skies. I saw this: “The deaths of newborn babies in Nigeria represent a quarter of the total number of deaths of children under-five. The majority of these occur within the first week of life, mainly due to complications during pregnancy and delivery reflecting the intimate link between newborn survival and the quality of maternal care. Main causes of neonatal deaths are birth asphyxia, severe infection including tetanus and premature birth.”

I ran to my king. I cried and rolled on the ground. I begged. He replied again: “there are people who stumble on luck there. They get born and they live there. They have learned the Nigerian way. They know the tricks of living. Pray that luck visits you.” He kicked me back into the realistic existence of my mother’s womb.

I remained there. I thought about the issue for seven months. As I was thinking, the doctor lied to my mummy. He pulled me out. They called my birth a cesarean style. And I could hear some people calling me a premature baby. I didn’t like it. I consulted my Ogbanje friends and they taught me how to escape this hell.
Every night, my mummy prayed to the heavens to protect me and to make me stay longer. She would check me everyday and ask the doctor if I was fine. They assured her and told her I was doing well.

I was not doing well. The clinic was located at Ikoyi and they called it The Military Hospital. Describing the place is hard. I don’t know how to do that. Go there! The nurses behaved like animals. They don’t respect human beings, I remembered.

One night, I slept and never woke up. My mummy wept. She blamed her enemies and friends for my exit. I will come back only after she divorced that country or when it changes. But not yet. Not yet.

Continue Reading
You may also like...
Related Topics:michael irene, nigeria, poem, poet, poetry, the visitation of an ogbanje child