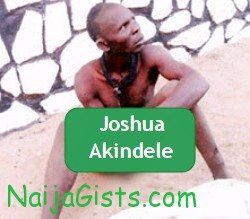 56-year-old Joshua Akindele, a native of Etokia in Ogun State who is a cannibal that operates under a hole at Gbaji bridge along the border of Badagry and Seme has been arrested. naijagists.com

Joshua, a former Okada rider who was arrested by Oloko village vigilante group claims he was introduced into the business by a friend who said he can’t make a decent living riding Okada 15 years ago.

According to his confession, he eats and sells human parts to ritualists and some churches who engage in ritual killings.

He further confessed to Crime Guard that he is the evil man behind the incessant killing of people within Oloko village. He catches his prey by hitting them with ply woods and then dragging them into the hole he dug under the bridge before splitting their body parts into pieces for food and to sell to his ritual buyers.

When queried on how he carried out his killings, Joshua confessed that anytime he sees someone walking alone without being conscious of who is watching, I walk slowing up to them and use a big ply wood to hit them on their heads after which they fall unconscious, I then drag them into the hole and use a knife to cut them into parts which I sell to some churches and some ready buyers who indulge in ritual killing for easy money, and some times when I feel hungry late in the night, I eat some parts for food.

He further said he charges the following for the body parts:

Amos Owolabi, a vigilant member of the a vigilante group in the area alerted other members of the group and palace guards of the Baale of Ajara Topa community to the movements of Joshua.

He told Crime Guard that at about 1 a.m on 21st of November, he was on his normal routine watch when he noticed him (Joshua) crawling into the hole with a rice bag, he quickly alerted other members who confronted him with a gun and ordered him to drop and open what he was carrying. When he did, they discovered rotten human parts; skulls, legs, hands, breasts e.t.c.

Crime Guard visited the palace of the Baale of Ajara Topa community, Chief Samuel Amosu Owolabi, who after confirming the incident told Crime Guard that he was sleeping in his palace when an emergency call woke him with the caller informing him that a man had been arrested by members of his palace guards in collaboration with members of the vigilante group with human parts.

Chief Samuel said he quickly called Chief Patifo , Baale of Iyafin whom his community shared the bridge with to accompany him to the scene. When he got there, he noticed a mob had begun beating the suspect and only stopped after he begged them to let him live so that proper investigations will be carried out by the police.

Crime Guard confirmed the suspect was in the custody of the Badagry police division from a police source who pleaded anonymity.(Credit:Vanguardngr)