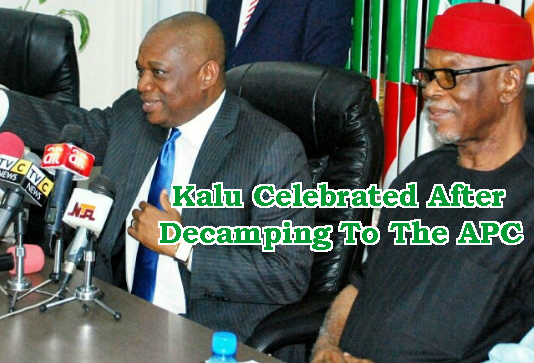 November 18, 2016 – There Should Be No Escape For Looters & Corrupt Nigerian Politicians No Matter The Political Party Affiliation

The Nigerian corrupt politicians are now employing newfangled tricks,stratagem and subterfuge to evade justice and truncate trial under the close watch of the current administration. Many among the politicians whose corruption are well-rooted and evident are now seeing the APC party as a safe haven to escape prosecution or to have their trials stalled.

Orji Uzor Kanu former chieftain of PDP party who was accused by the EFCC of diverting state funds totaling N5.6 billion during his tenure as a former governor of Abia state has now decamped to APC party. During his visit and the meeting he held with members of the APC party, this suspected corrupt criminal made a lot of lengthy promises to deliver the entire south-east of the country to APC party.

One would therefore be forced to ask that, does it now mean joining APC party is a criteria to dropping any charges leveled against any corrupt politician in the country who belong to other parties? Or could it also mean that APC party has now become a sanctuary to the politically corrupt asylum seekers whose many of their charges and trials have been tactically delayed in the court without any success of their prosecution? Obviously their are many questions begging for answer.

Many corrupt government officers who formerly held public offices have carted away massive funds meant for rebuilding the nation’s frail economy and it chattered infrastructures only for them to return token part of the humongous funds they’ve embezzled after they were apprehended and were meant to face trials. But more often than not, those trials are often stalled in the long run. Many of the cases or criminal charges filed against them have either being buried or held out of the public view.

Nigerians have mostly seen trials of our looters on the various media outlets in the country which has made many living in both home and abroad wondered if the current anti corruption war by Buhari-led government will ever achieve any meaningful or praiseworthy objective.

While every Nigerians retain the freedom and the right to join any party at anytime, it is however noteworthy that those whose money laundry acts have been brought to light should be meant to stand trial and be prosecuted as their act of endemic corrupt practices have resulted too many abominable exercises such as kidnappings,rituals, and other serious crime as a result lack of employment or loss of job among others.

Many hungry Nigerians both young and old have been forced to engage in theft in the public places and some who were caught in the act have being brutally murdered on the metropolitan roads and other places in the country due to deep economic crisis and lack of essential means of sustenance to survive . Many of the missing billions of naira are still held up in the hands of few corrupt public officers while more than 180 million Nigerians are wallowing in abject poverty with no way out.

If this wicked men are not brought to justice or are set free after all criminal charges leveled against them by the “Economic And Financial Crime Commission” EFCC cannot be defended by them and are still allowed to decamp to the ruling party, then Nigerians will be forced to conclude that APC-led government is harboring,sheltering and providing refuge and encouraging more and more criminal politicians to continue to siphon public funds meant for the development of the country and it citizens.

The government must therefore take drastic measure against those found guilty of corruption irrespective of their party affiliation and their decampment into the ruling party.

1peter 4:17 says “judgement will start from God’s house”. The current administration should adopt such policy and sanitize some of it own party members accused of massive corruption as well as other decamping party members into APC party.

There should be seriousness and impartiality in the ongoing anti graft war if we are to witness a sharp drop or total disappearance of money laundering act in the country.

Continue Reading
You may also like...
Related Topics:nigerian, party, politicians