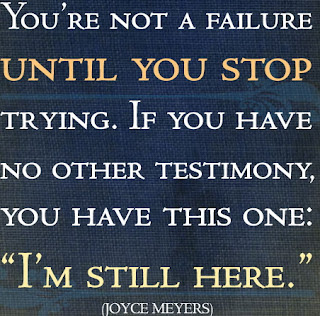 “Rejoice not against me, O mine enemy: when I fall, I shall arise; when I sit in darkness, the LORD shall be a light unto me.” ~ Micah. 7:8

The fact that you fell once does not make you a failure. A failure is not one who fell, but one who refuses to get up when he fell. Everyone goes through a “fall” at one time or the other, but the difference between a success and a failure is that the successful person gets up, dusts himself and keeps going. He refuses to wallow in self-pity, while the failure stays in the fall.

Take a look at David; David was a man that committed so many atrocities. He took the wife of his staff, tried to conceal it by bringing him home during the battle. When that didn’t work, he killed him and took over his wife. I’m talking about David and Beersheba.

Yet, when God was going to describe him, He called him a man after His heart. But God that can’t be true, after all, he committed fornication and murder in an attempt to cover up his error (might be your thinking).

But check it out; once the Prophet confronts David, he quickly goes on his face before God. David never covered any of his errors. He was quick to confess them and turn away from them and each time he did, the mercy of God reached out to him.

The same thing with Paul (who was Saul). He was the one-man riot squad that waged a war against Christianity to the extent that he had the approval to go and wipe out Christians when the Lord met him in Acts Chapter 9. Yet Paul, writing to the church in Corinth said in 2 Cor. 7:2 “Trust us.

We’ve never hurt a soul, never exploited or taken advantage of anyone” (MSG). But Paul, you killed the innocent Christians, might be your comment, but I hear Paul say: if any man be in Christ, he is a new creature (2 Cor. 5:17).

The same can be your story. You don’t have to die in guilt. Get up, dust yourself and move on, because your future is bright!.

2 thoughts on “Thursday Inspiration: You Are Not A Failure!!!”