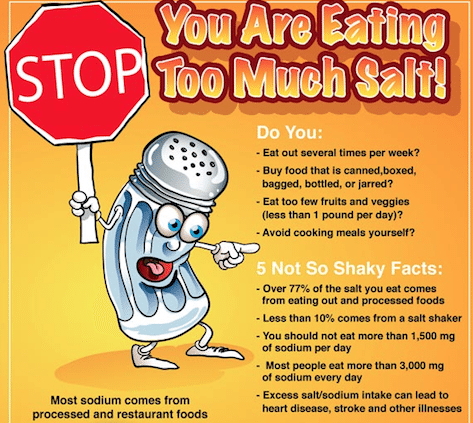 The FDA (U.S. Food and Drug Administration) is advocating that food industry should cut down on the salt in processed food, so as to reduce the risk of high blood pressure, heart disease and stroke. In draft voluntary guidelines issued on Wednesday, the agency set both two-year and 10-year goals for lower sodium content in hundreds of processed and prepared foods.

According to a report in healthday, the aim is to reduce the risk of high blood pressure, heart disease and stroke among Americans citizens. “Many Americans want to reduce sodium in their diets, but that’s hard to do when much of it is in everyday products we buy in stores and restaurants,” said Sylvia Burwell, U.S. Secretary of Health and Human Services.

She added that “the announcement is about putting power back in the hands of consumers, so that they can better control how much salt is in the food they eat and improve their health.”

Cutting down on sodium content in processed food is not only important for Americans, making the food industry in Nigeria adopt this measure will also benefit Nigerian citizens.

Limiting sodium intake generally is tough because about 75 per cent of sodium in diets comes from processed or prepared foods, not salt that is added at the dining table. Even foods such as bread and cereals can have high amounts of salt and consuming them without control could pose a health risk because a lot of people don’t realise they have high blood pressure.

According to a registered dietician and spokesperson for the Academy of Nutrition and Dietetics in Atlanta, U.S., Marisa Moore, the average American eats about 3,400 milligrams sodium a day, but the recommended amount for a healthy person is 2,300 milligrams a day. “For people with high blood pressure or diabetes, African Americans, and anyone who is age 51 or older, the daily recommendation is 1,500 milligrams of sodium.”