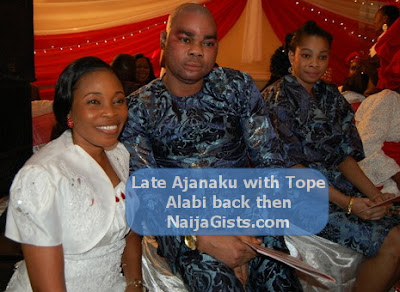 Few days after the death of her former spiritual father, popular Nigerian gospel artist Tope Alabi has opened up.

The singer in a recent interview expressed her sadness over the demise of Prophet Ireti Ajanaku who died under a mysterious circumstance last week.

Before his death, the controversial preacher claims Tope Alabi demanded sex from him, a story which Tope and her husband later debunked.

The couple left his church weeks before his death.

Here is what Tope Said on Ajanaku’s death;

‘I was sad when I heard it and it saddened me that we didn’t settle before his demise. If I had known, we would have sorted out our differences’.

An online report claims 27 ogboni cultists visited his residence where they requested for privacy with his corpse.

They reportedly left about one later after performing a ritual on his corpse.