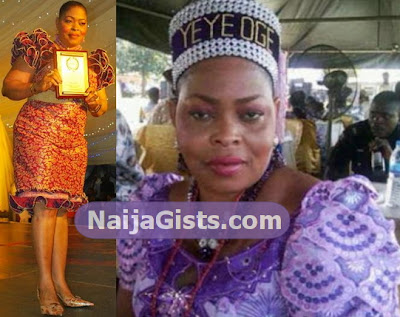 August 6, 2013 – Toyin Adegbola Turns Politician In Osun State: Asewo To Re Mecca Appointed As A Board Member Of Osun Arts & Culture Council

Toyin Adegbola aka Asewo to re mecca has been appointed as a board member of the Osun State Arts and Culture council.

She is set to join her fellow Yoruba movie practitioners like Adetokunbo Abolarin, Ifayemi Elebuibon (Araba of Osogbo) and others.

As at now, Araba of Osogbo, Ifayemi Elebuibon is the Vice chairman of Osun state Arts & Culture council while Adetokunbo Abolarin, The Olu of Ila is the chairman of the board.

Other members of the board include Ajao Adelakun and Chief Esuleke.

She is the first female politician in Yoruwood.