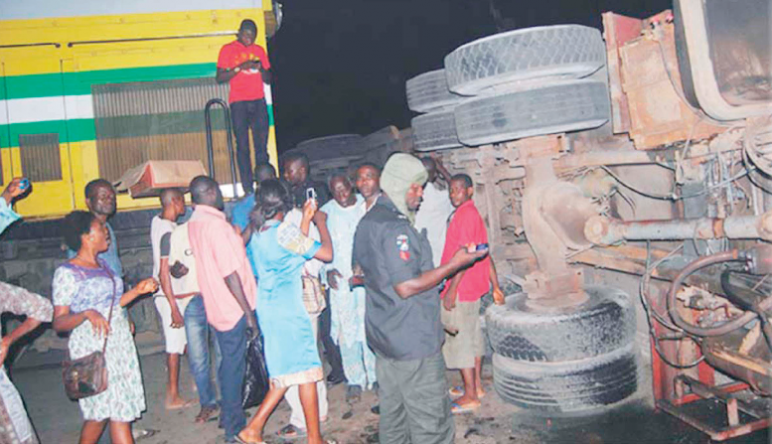 Several passengers escaped death yesterday when an overcrowded Lagosbound train from Ogun State collided with a truck at Shogunle Railway Crossing in Lagos.

A News Agency of Nigeria (NAN) correspondent aboard the train reports that the incident occurred about 8a.m. The refuse clearing truck had tried to cross the railway line ahead of the approaching train, but was unsuccessful.

The train driver, seeing the partial blockage of the track by the truck, reduced speed, an effort which reduced the impact of the collision and saved the train from derailing. Despite the speed reduction, the train hit the back of the truck which was still on the track. Some passengers were injured as a result of the impact. Following the impact, the truck hit the barrier at the crossing, which also hit a nearby electric pole.

Passengers aboard the train commended the train driver for preventing it from derailing, as it continued to the Shogunle Station where some passengers alighted and others went on board.

The Director of Operations, Nigerian Railway Corporation (NRC), Mr Niyi Alli, later said that the truck had been impounded by the corporation and taken to its headquarters at Ebute Meta Junction.

The derailment disrupted the services of the corporation for the whole day leaving hundreds of its passengers heading for Kano stranded at its terminus in Ido, Lagos.

Continue Reading
You may also like...
Related Topics:accident, lagos, Train