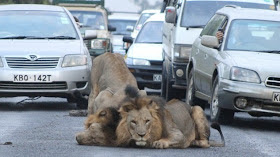 The 2 lions in the above picture recently brought traffic to a standstill in Nairobi Kenya.

The two lions were spotted as they lie down in the middle of the street during an early morning commute around the Nairobi National Park.

The young male Lions appeared on the side of the road and strolled out in front of cars and trucks for a roll-around.

The African lions’ antics caused tail backs as they found the busy road the perfect place to rub themselves in buffalo faeces.