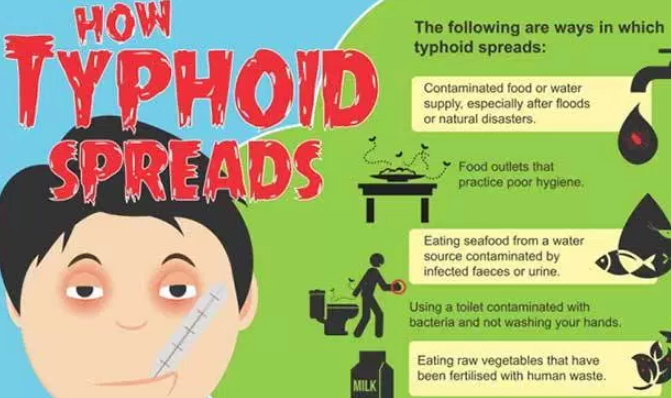 Typhoid disease is deadly. The good news though is that if we stick with diligent preventive measures as well as take urgent step to receive treatment when we fall ill to typhoid, typhoid can be defeated.

As I mentioned last week under the general discussion on food and water poisoning, typhoid is very common. Perhaps second only to malaria illness that most doctors in our environment will consider when an individual presents with fever especially if such fever is associated with abdominal/tummy pain/ache and loose or soft frequent stools (poo). Therefore, typhoid illness is very common and equally as deadly.Typhoid affects about 21million people and kills about 200,000 people yearly in the world (malaria kills about 600,000 by comparison). Without speed and effective treatment, about 12 percent-30 per cent of the people affected by typhoid will die (compare 50-70per cent death recorded under Ebola). Even if a person is treated, about five per cent of the afflicted will continue to serve as a carrier of the disease.

For ease of understanding and for the sake of our discussion, let us therefore refer to the illness as “typhoid” and nothing as “paratyhi”

What are the symptoms and signs of typhoid? The symptoms may not necessarily follow in any particular order as we respond differently to different conditions when we are challenged. Also, children are particularly vulnerable. They may not be able to accurately describe what they are feeling. As a result, the illness of typhoid may become more severe in children and could kill so easily because of this fact.

Therefore, the fact that someone who had typhoid failed to have fever is not to say that the loose stools or bowel movement which may be the only symptom alone may not be due to typhoid. Any change in a person’s health especially as pertaining to food, bowel and appetite must therefore be thoroughly investigated.

With these caveats in mind, let us now deal with clinical features of typhoid.

The most frequent and important symptoms and signs are changes in the bowel functions which may be associated with general signs of infection. Like any other infection, typhoid has its own incubation period. Incubation period is the time between when the germ lands in the human body and the first time when the victim starts to experience illness. The bowel changes may be nausea, loss of appetite, abdominal (tummy) discomfort, vomiting, loose stools, stooling that seems to relieve the abdominal pain but returns as soon as new food reaches the bowel. The victim, loses energy and thus get tired stemming from often frequent loose soft stools, loss of appetite and vomiting. Confusion and headache could also set in.

If the earlier symptoms do not kill the person, the latter complications may become fatal. Within a matter of three weeks from onset of illness, the person may be dead.

Diagnosis: The illness needs confirmation via blood, urine or stool samples. But delay for confirmation should not be a barrier to starting treatment. The use of and demand for “Widal” test is not confirmatory and is often not the best indicator of the illness. In my practice, I will collect samples for relevant tests and then start the treatment immediately.

Prevention: You can do a lot to prevent typhoid illness. Dispose of stools/feaces(poo) adequately. When you visit the toilet, ensure you wash your hands after. As a rule of thumb, avoid if possible, from eating outside your home. Food vendors/sellers outside the home are often dispensers of typhoid. Avoid eating the food whose origin and cook you do not know of. A key source of spread of typhoid is food sellers or vendors. Food outlet owners need to regularly screen their staff for typhoid and other infections. If you are in doubt of the food and water, cook or re-heat the water or food until either is steaming hot before eating. Drink only well sourced or bottled water.

Also importantly, there are vaccines that can provide partial immunity against typhoid and this immunity could last two years. So, vulnerable persons, children and travelers should consider receiving this vaccination. However if illness starts, ensure you ask for medical help immediately.