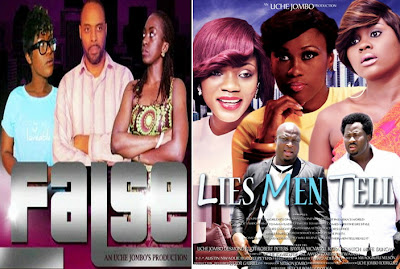 False starred Kate Henshaw, Kalu Ikeagwu and Uche herself; Kalu is the unfortunate husband who wanted to eat his cake and have it, by playing love with a stranger on Blackberry despite having a dutiful and dedicated wife in Kate Henshaw.

In a twist of plots, the stranger (Uche Jombo) took the play too far, believed the mirage and romance of Blackberry Messenger (BBM) to be real, went to Kalu’s house and demands that Kate leave her matrimonial home for her to come in. Unfolding event afterwards proved fertile as life was lost or the verge of being lost. Kalu tried to save his marriage at the same time got caught in the web of manslaughter/murder; it was a classic case of BBM romance gone too far.

In Lies Men Tell, a philandering Ibo husband, Desmond Elliot took his playboy game too far, his smart wife, Uche Jombo outwitted him in the game of smartness. It will be a game of winner take all with a Range Rover worth over ten million naira at stake. Desmond told series of lies like adulterous men do, but at every juncture he met the imprint of his wife. In another family, Bayray Mcnwizu, after enduring series of lies from her philandering husband Mofe Duncan, got an STD as an attendant consequence. It was one endurance too many.

The release of both movies at the end of this month will coincide with the celebration of Uche Jombo’s month on Africa Magic Entertainment on DSTV. In the last couple of years, Uche Jombo as not only earned her place among A-list actresses, she has transcended to be a prolific movie producer with over 12 movies to her credit.