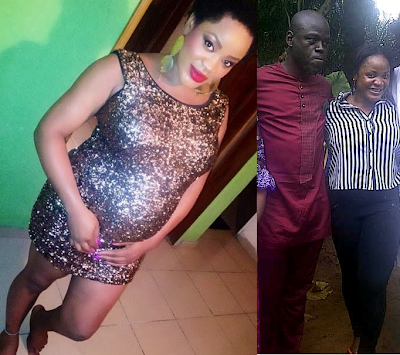 Heavily pregnant Nollywood actress Uche Ogbodo has called it quit with her husband-to-be, the father of her unborn baby.

The Nollywood actress in a recent interview apologized to her fans for misleading them when she claimed she has married him.

The expectant mother who is currently in the United States said meeting her Ex-footballer lover Arthur was the greatest mistake of her life.

She has made up her mind to raise her child alone.

Here is an excerpt from a recent interview with Uche Ogbodo;

Hello Uche, I have a few quick questions for you. I heard your barely a year old marriage has crashed, is this true? ..

Well that may be true but what isn’t true is that it wasn’t really marriage yet because it wasn’t fully formalised, we were still in the process of formalising it when all hell broke loose, so I was merely Engaged to be married to Ato Ubby. It was just an introduction? Why didn’t you clear that impression all this while?

…I just felt there was no need to do so because the wedding plans was to follow shortly, unfortunately it didn’t because things didn’t work out the way it should. I walked into a no-win situation.

What happened? This is really a hard question to answer, but all I can say is that barely one month into the engagement and in the process of planning a formal wedding I realized I had made the greatest mistake of my life. The foundation of the union was based on lies and deceit.. shocking lies. We had been dating for a almost year and I thought I knew it all but nothing prepared me for what unfolded.

Is he married already? …No, he isn’t married to anyone else

You got pregnant in the process?

On the verge of trying to salvage the situation I found out I was expecting a child. I kept quiet to the rumours making the rounds because I was left with the option of thinking for my child and trying to salvage a dead situation but now I have finally made up my mind to break off the engagement and my reasons are irreconcilable…

Uche so you are saying you never got married and the engagement is off?

I just want to be left alone to take care of my child. I wasn’t married, I was engaged to be married but as things stand now, the engagement is officially broken due to irreconcilable differences and since I am having my baby soon, my doctors has advised me to rest as my health and that of my baby is the most important thing right now..

So you are the one walking away and not him? You want to go into details?

..Yes I am the one walking out on the pack of lies, I am not going to pretend because I want to be married, I am not desperate and I would rather swallow my pride and accept I made a big mistake than forge ahead in lies. I am sorry I cannot go into details because I do not want to trade words or run my ex down because he is the father of the child I am carrying. I am sorry if keeping quiet misled people into my status was already married. The excitement of looking forward to birthing my child kinda numbs the shock and disappointment but I will be fine

So, after the introduction, the planned marriage was dead on arrival? …exactly and all this while, we have been trying to settle the issues, that’s probably how you got hear of it.

A source very close to Uche Ogbodo who sent NaijaGists.com the interview excerpt this afternoon said the actress lied to the interviewer.

The source said Uche Ogbodo dated Arthur with the hope that he’s rich and well to do and when she found out the man can’t afford her lavish lifestyle, she walked out of the relationship.

Uche is looking for a fully loaded man… Sorry she fell into wrong hand.