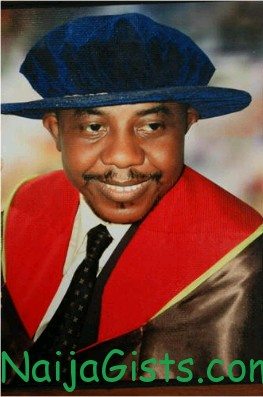 Sept 17, 2012 –  UI Professor Kolawole Olu Owolabi Is Dead (Dean Of Faculty of Arts At the University of Ibadan)

Professor Kolawole Olu Owolabi, the Dean of the Faculty of Arts At UI, University Of Ibadan is dead. naijagists.com

The death of the 51-year-old dean is the 3rd death reported in 2 years at the same faculty.

According to eyewitnesses, Prof. Kolawole who came out of his car in a bid to purchase something suddenly collapsed.

He was rushed to an undisclosed hospital where he was confirmed dead.

The late Professor became the Dean of the faculty in August of last year.

He was the former HOD of Philosophy Dept. from Oct 02 to Oct 04.

He was born in Ikene Remo in Ogun State Nigeria on the 30th of May 1961. He hailed from Igbogila, Yewa North LGA.

Professor Olu Owolabi is survived by his lovely wife and 2 children.

Mike Adenuga Jnr: The Complete Story Of His Life & Achievements
Nigeria Will Split Into Three Countries Before 2015 – Rev. Chidi