On Saturday night, the  Nigerian community along with friends and well wishers gathered at the London Welsh Centre, for the Nigeria UK Based Achievers Awards.

Among the winners was newly married, PR Guru, Film Producer and Actress,
Theodora Ibekwe-Oyebade, who dazzled in an Ankara evening gown. She was
beautifully made up by Libeks BC.

During her thank you speech, she said “I dedicate this award to my husband
(Ayo Oyebade), who has been a great support to me over the past year, never
leaving my side…”

Theodora now has three awards, this year, to add to the twelve she has
received in just a few years. She remarked that 2013 is so far her best year
ever.

Check out more photos from the award ceremony below; 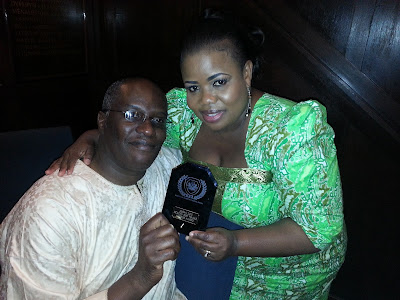