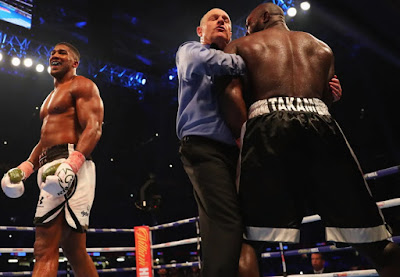 Yes, in case you did not get the gist. It happened. If you were online on Saturday night to monitor the Anthony Joshua’s WBA and IBF title defence you were likely not to miss the gist.

The Avon and Somerset Police’s Operational Support Team were caught on that Saturday night retweeting a link to a live stream on the Periscope app.

Not less than 1.6 million may be estimated to have noticed the provocative site as Wikipedia (online search web) described the Avon and Somerset as the larges police force in England and Wales that provides service for over 1.6 million people.

Fact check shows that not less than 80,000 spectators where at the Principality Stadium in Cardiff, Wales, to see the bout but greater number of spectators where online following up via various channels including on twitter.

Avon and Somerset Police have now apologised, describing it has a mistake and “human error”.

In a statement gotten by www.mirror.co.uk the police said:

“We are aware that last night a spam link, containing inappropriate content, was accidentally retweeted on one of our official A&S Police Twitter accounts.

“Unfortunately, this was due to human error and the account user was unaware that it had happened.

“The post containing the offending link was removed within an hour, as soon as we became aware of the matter.

“We would like to thank those who brought it to our attention and we apologise for any offence that may have been caused through the sharing of this content.”