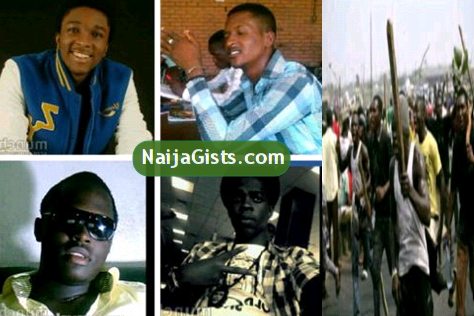 As at the time of this report, great UNIPORT students are currently rioting at Aluu Village where 4 Uniport students were burnt alive last week. naijagists.com

Here is an unedited message from a University of Port Harcourt student:

Jst hear Dis……..The truth is finally out!!! One of the four boys borrowed some huge amount of money to 1 Aluu boy who is his friend and for a time now d aluu boy has being trying to play smart(not to pay back) and on that faithful friday, d boy arranged with his other friends to surprise his debtor very early in d morning to ask of his money but unknown to him d animal had plans too, after some arguments d aluu boy called his fellows and started shouting that d uniport boys are cultist/thief, after much beating they swore that they must be killed so that d uniport boyz won’t report to police or call other students on them, pls as u read this ask urself some simple questions like y did they insist d boyz must die b4 other student or police will hear, (2) listen very well to what was said in d video. Painfully,getting those aluu boys to me is as easy as ABC, aluu is a small place..

Dis hardworking boyz were very happy boyz whom were very popular in organizing shows, we ve just lost our future celebrities,media youths, dis are boyz that travel abroad now tell me what’s a laptop to them and where on earth is d laptop they stole???? we won’t sleep on dis, Noooooo! justice must prevail—–phina.

We shouldn’t let this happen in our country again, cos tomorrow it could b you, ur brother or ur friend.

Share Truth so their soul can rest in peace!