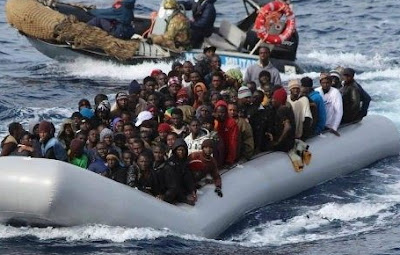 The current humanitarian crisis in Sabratha, Libya, has once again brought the precarious situation of migrants in the North African country to the fore. The coastal city is one of the main departure points for migrant boats attempting to make the perilous journey to Europe across the Mediterranean Sea.

The staffs of the International Organisation for Migration (IOM) and UNHCR (the UN refugee agency) have been working around the clock since early October to meet the emergency needs of thousands of migrants, including pregnant women and new-born babies, in Sabratha, located 80 km west of Tripoli.

After the smoke cleared following three weeks of fighting between rival militia groups in September, humanitarian helpers were shocked to discover about 14,500 migrants in the city. They had been detained by a militia group, a big player in the migrant smuggling business, in different locations including farms, houses and warehouses in and around Sabratha.

Libyan authorities estimate that an additional 6,000 migrants and refugees are still being held by smugglers in the city. If confirmed, this would bring the total number of refugees and migrants held in Sabratha to 20,500, including those in official detention centres, the IOM said on October 17.

The ordeal that the freed migrants, most of whom are sub-Saharan Africans –mainly from Nigeria, Eritrea, Mali, Senegal and Guinea, have gone through is heart-wrenching.

UNHCR representatives have described images of “suffering and human abuse on a shocking scale”. Many of the migrants were visibly traumatized; most have suffered abuse including sexual and gender-based violence, forced labour and sexual exploitation.

Many were suffering from all manners of illnesses, with some bearing bullet wounds and other visible signs of physical abuse. Not to talk of their general malnourishment; hundreds said they had not eaten for days.

In fact, the UN has had to send emergency aid of 100,000 meals and other relief materials to the city to take care of the migrants before they are transferred to official detention centres by the Libyan authorities for further assistance.

The reality is that the suffering of the migrants will only continue in these centres. Several international organisations have published credible reports, documenting regular and severe human rights violations of refugees and migrants in the so-called official detention centres.

The situation of irregular migrants in Libya which in better times was always precarious has assumed a crisis proportion. This is why.

The UN-backed Government of National Unity in Tripoli issued a directive in August, compelling NGO rescue ships to seek official permission before entering Libya’s waters to carry out rescue operations. The directive has severely curtailed the activities of these humanitarian organisations and three of them – MSF (Doctors without Borders), Save the Children and Germany’s Sea Eye – have withdrawn their vessels altogether.

This means lesser search-and-rescue missions for capsized boats and increasing fatalities among those crossing the Mediterranean. IOM reported on September 28 that 2,655 migrants have drowned in the Mediterranean so far this year.

In fact, given their choice of vessels, such as inflatable boats which are not built for the high seas or to travel long distances, the smugglers know too well that these boats are not able make the perilous, 300 kilometre journey to Europe. Their murderous gamble is that their helpless victims will be rescued along the way.

Italian technical support for the Libyan Coast Guard has also enabled a better monitoring and patrolling of the North African country’s maritime borders.

Moreover, inhabitants of coastal towns tired of seeing dead bodies of migrants, whose boats had capsized in the Mediterranean, washing up on their beaches are reported to be forming vigilante groups to curb the activities of people smugglers.

All of these developments mean lesser numbers of boats are able to depart from Libya, trapping migrants in the country. In August, about 2,936 migrant arrivals were recorded in Italy compared with 21,294 in August last year, representing a sharp drop of 86 per cent.

International organisations estimate that between 800,000 and one million migrants are in Libya desperate to make the dangerous crossing across the Mediterranean Sea to Europe and, they hope, to a better life. The fact is, Libya is fast becoming a dead-end for migrants.

In a country with two governments competing for legitimacy and hundreds of armed militias who are not controlled by either of the factional authorities, Libya is a de facto lawless place. While that’s bad enough for Libyans, migrants bear the full brunt of the unfortunate situation in the North African country.

This explains why migrants, especially sub-Saharan migrants, are exposed to widespread and sometimes horrendous human rights abuses, including slave labour, rape, physical violence and arbitrary killings. Not to talk of their miserable living conditions.

In April, IOM reported how migrants are traded for slave labour and ransom among people trafficking criminal networks in Libya.

Would-be migrants travelling to Libya now risk getting caught up in the country’s nightmare of instability and lawlessness. They face certain dangers to life and limb and risk losing their lives.

The ongoing crisis challenges society to seriously address the issue of irregular migration because of its rising costs to families, communities and the nation at large.

Migration is a fact of the human experience. And it’s perfectly legitimate to seek greener pastures outside one’s homeland. However, it’s important that would-be migrants get well informed about where they want to go, how to get there legally and, importantly, the reality that awaits them in their country of destination. This will enable them to make smart, fact-based choices.

Most of the young people trapped in the process of irregular migration are victims of human smugglers who lured their unsuspecting clients with false promises into difficult situations without easy exits. These criminals are more interested in making quick money than ensuring the safety and well-being of their vulnerable customers.

The lesson of the ongoing Libyan crisis is that migration can only bring the desired success when it’s well considered and planned otherwise it can lead to nightmare.

About the author: Awoniyi is director of Migration Enlightenment Project Nigeria.