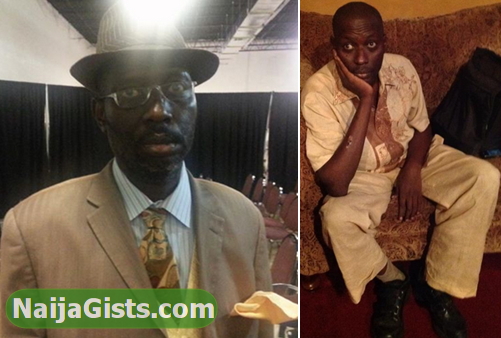 For those who know him back home, one time popular Nigerian journalist Rilwan Omosun was the ex-sports Editor for the now defunct Daily Times newspaper.

Rilwan Omosun who is currently battling immigration challenges in the US might be having a hard time with his health following his divorce few years ago.

A close friend to Rilwan, one Azuka Jebose Molokwu shared his life story on Facebook few hours ago. Beware this Azuka guy might be a fraudster.

Read the story Azuka shared about Rilwan Omosun‘s condition below;

In 1990, at the age of 31, I abandoned my job as the sports editor of Nigeria’s first evening daily paper, Evening Times, a subsidiary of THE DAILY TIMES of Nigeria. I relocated to United States to further my education and seek professional excellence with available opportunities in the world’s free press. I arrived Houston Texas, naïve and timid, with no formal training, information or survival guide kit to a migrant’s settlement in America, seeking all things bright and beautiful that “Yankee” had to offer. It’s “God’s own country”.

I settled into a shared apartment with a cousin willing to accommodate me until I integrated myself into a new lifestyle and culture. Everything functioned here. Everyday, I waited for the right opportunity to be indoctrinated into the American dream life by my cousin. While waiting for the appropriate time, I was privileged a social security number registered in my name. My cousin would come home, fill out some forms and asked me to sign them and import my social security…. I trusted everything he said and unknowingly empowered his criminal and fraudulent empire.

I married in 1992. Few minutes after my marriage, I was arrested by the FBI for alleged financial fraud, credit card and check frauds totaling $450,000 dollars. I never asked my cousin what I was signing. I willingly, though ignorantly surrendered my priced information to him. He used these against me.I began a long fight with Americas judicial system to clear my name. My identity had been stolen by a most trusted family member, used to commit a heinous financial crime. I was arrested by the Federal Bureau of Investigation. I was and I am still innocent. Between these challenges, I got married. After years of court arguments and investigations, I was exonerated. The stress had taken a deep chunk off my soul. By 1998,I was diagnosed with kidney failure. Two years later, I had stroke that paralyzed my left body … One year after my stroke, my wife left because she could not care for a husband battered by stroke. In 2003, my ex wife who left me because I had stroke, was stroked. We have a 17 year old wonderful daughter.

I moved to Maryland after my divorce to begin a new life. I carried and still wear the sad badge of a victim of Identity fraud. I am still an undocumented immigrant as a result of the identity fraud. I am an illegal terminally sick alien. I am on dialyses three days a week, thanks to a wonderful Nigerian that owns the Community Dialyses Center in Maryland. In March, doctors diagnosed me with congestive heart failure. They gave me one year to live. I have till March next year to expire.

Few days ago, I called my friend and colleague, Azuka Jebose Molokwu and hopelessly told him my conditions. I wanted to go back home. I rented a room house in Maryland. The landlord was supposed to pay the light bills from my monthly rent. He allowed the bills late and lights had been interrupted. I am too weak and broke to fight him in court. I stayed In that house for several weeks without lights. I fell four times and each time stayed on the floor for eight hours because I had no help; my phone battery died and I had no power to charge my battery. I am disabled and weak. I wanted to return home.

This afternoon, I checked into a homeless shelter. But the female administrator said I didn’t belong there, after seeing my condition. She tearfully paid for my taxicab ride back to the Motel. I will be here until Azuka helps me…I am back to Motel 6, hoping for your assistance. Azuka convinced me that returning to Nigeria may not be the best option. I have a seventeen year old daughter that is close to me. I want her to bury me. I need your help in getting an apartment or a house the next one year or until my life expires. You are my family. After all, we are God’s children”.

How come they’re not leaving a phone number to contact them at?

This looks very suspicious to me.

A quick check on his Rilwan Omosun‘s Facebook page reveals nothing of such.

On June 30th, 2013, he shared a lovely picture of himself and his daughter captioned “Me and my daughter Habiba”

See the picture below; 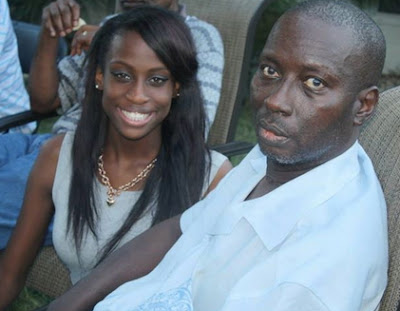 “Happy mother;s to all fb mothers, today is mothers day in america this is a day most kids shower there mothers with gifts and special dinners, most wives are served breakfast in bed today, nene happy mother;s day . though u no longer here am stil go celebrate as if u were here happy mother:s day to u and all my step mothers rip all hope to see u all in heaven.”

On the 13th of April this year, he claims he had stroke; Hear what he said then;

“On this day 13 years ago my life changed when i had a massive stroke dat left me paralysed on my left leg and left hand, during this period i have seen alot of people die from it,though its been tough 13 years but it has brought me closer to my creator. i just want to praise and thank u lord for letting me see this day. i know my full healing is coming ijn amen.”

So where did they get the above message soliciting for money from?

Make u no say NaijaGists.com didn’t warn you o.