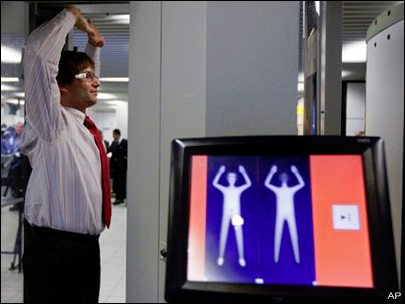 “The agreement centres on exchange of intelligence and joint operations. This is another landmark achievement that will lead to the dismantling of illegal drug syndicates in the country,” Giade said.

The scanner has been installed at the Murtala Muhammed International Airport in Lagos State, southwest Nigeria.

It was financed by the United States Africa Command, the US Ambassador to Nigeria, Mr. Terence McCulley, disclosed yesterday at the commissioning of the scanner at the Lagos airport.

With the installation of the latest scanner, Nigeria’s biggest airport now boasts of two world class full body scanning machines that will boost arrests of suspects and seizures of hard drugs.

“It’s the fifth of such scanners that we have transferred to the NDLEA. This latest scanner was financed through the US Africa Command.

“It’s the measure of the confidence that we have in our partners in NDLEA who have been aggressive and effective in combatting drug trafficking in Nigeria and therefore we are very pleased to support them,” McCulley said in an interview with P.M.NEWS after the event.

He added: “Clearly this is working and we are very pleased with the partnership that we are having with the NDLEA and the Nigerian Civil Aviation.

“It’s a long partnership. It’s a profound and robust partnership. We work very well together. We’ve had the honour of participating and collaborating with the NDLEA in many seizures. We have an active office of Drug Enforcement Administration, it’s a long term partnership.”

The NDLEA Chairman, Ahmadu Giade, said the new scanner would fortify the main entry and exit point in Nigeria.

“We are here to celebrate the agency’s enhanced capability to prevent drug barons from using our airports in drug smuggling. With additional body scanning machine, the agency has entered unto an impregnable phase as we further unite against illicit drugs by fortifying the entry and exit points. naijagists.com

“The United States is one of Nigeria’s worthy partners. Our level of collaboration in drug control is very cordial and commendable,” Giade said.

“The agency can now effectively discharge her functions even with the high volume of passengers and goods at the airport,” Giade said.

“It’s an excellent example of the United States’ government working with important partners in sub-Saharan Africa, in this case the Department of Defence, the Department of State and the Drug Enforcement Administration,” he added.

The event was graced by the Director General of the Nigerian Civil Aviation Authority, Dr. Harold Demuren, the US officer African Command Lieutenant Colonel Tim Hafner, the NDLEA Commander at the MMIA, Mr. Hamza Umar and some commanders and agents.