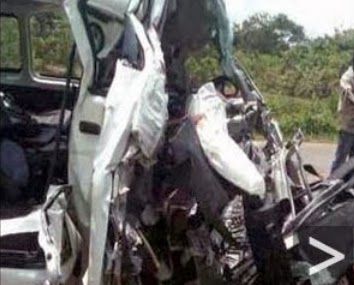 Tragedy struck Orji River in Enugu state on the day dedicated to celebrate lovers when a truck carrying stones lost control, skidded off the road and crashed into a market killing 27 people instantly.

A man and his wife were also burnt alive in Benue State while a dunrken police officer killed a politician in Oro Kwara state.

Some primary school students, said to be returning from school at the time of the incident, were, reportedly, among the victims.

Several traders, including motorcycle riders, sustained various degrees of injuries as a result of the accident, which occurred at the popular Oji River Wonderful Market on a day Nigerians were marking Valentine’s Day.

The truck, descending a hill from the Enugu end of the road, according to eye witnesses, skidded off the road after a brake failure and rammed into vehicles and motorcycles.

At least, ten motorcycles and four vehicles were damaged beyond repairs while several shops were also hit.
When Sunday Vanguard visited the scene of the accident, yesterday, an operation was in progress to remove corpses under the rubbles of shops pulled down by the truck.

Most of the victims were operators of boutiques, medicine stores and provision shops by the roadside.

The police, officials of the Federal Road Safety Commission and Civil Defense Corps, who were part of the operation, described the crash as fatal.

Eyewitnesses said those who sustained injuries were taken to the Oji River General Hospital while those with critical cases were rushed to National Orthopaedic Hospital, Enugu.

Chairman of the Market Association, Mr Augustine Mba, described the development as “tragic”, stressing that it was ” a dark day in the history of the market”.

“This is sad. I was here in my shop when I heard the bang and rushed to discover that it was an accident which claimed many lives. There are Okada people, there are traders, there are passers -by among other victims. Goods destroyed are worth several millions of naira. I don’t know the number of persons that died but it is not below eight. This is not the first time this kind of incident is taking place here. Two years ago, we witnessed a similar incident where various traders were killed”, he said.

According to him, the incident occurred around 3.00pm when the market was at full operation.
Chairman of the local government, Onyebuchi Jideofor, who mobilised to ensure that victims were rescued, was spotted helping to clear the debris.

He lamented the loss which he blamed on the inability of some road users to adhere to laid down rules.

The Enugu State Police Public Relations Officer, Mr. Ebere Amaraizu, confirmed that a total of 27 corpses were recovered from the scene.

He said that the rescue operation, which began after the incident, on Friday, lasted till yesterday afternoon, adding that investigations had commenced to determine the cause of the accident.
Fatal shooting

In Oro, in Irepodun local government area of Kwara State, tragedy struck when a police officer shot dead one Hon. Femi Awoyale, a former chairmanship aspirant of Ekiti local government under the platform of the Peoples Democratic Party(PDP).

The development sparked protests by youths in the town as the police officer, who was about to be lynched by a mob, was taken away by his colleagues from the scene of the incident.

Sunday Vanguard gathered that the incident happened around 11:15pm on Friday when fun seekers, including Awoyale, converged in the popular” Topmost Hotel” in Oro for the celebration.

Meantime,management of the hotel had invited the police to provide security for the Valentine’s Day fun seekers.

An eye witness said the un-named officer, drunk, suddenly woke up from his sleep when he heard noise of trouble makers and fired twice into the air.

The tension doused, the drunken policeman rose up again and released another gun shot which, this time, pierced the wall of the hotel and hit Awoyale in the chest where he was said to be having fun.

The victim slumped and all efforts made to revive him proved abortive; he died.

The lifeless body of the deceased was deposited at the University of Ilorin Teaching Hospital(UITH) mortuary.

The angry mob at the scene were about to lynch the said officer when his colleagues smuggled him out.

This development put an abrupt end to the Valentine Day’s celebration.

The killer police officer has been arrested for interrogation by the state police command.

Trapped in fire
In the Makurdi, Benue State capital, incident, a pregnant woman and her husband, identified as Mr. Avaan, were roasted in a mysterious fire disaster.

Sunday Vanguard gathered that the inferno, which engulfed the residence of the deceased persons, located at Akpehe area of the town, may have been started by a surge in public power supply.

“We were woken up at about midnight, on Friday, by wailings from the block of flats and, when we all ran to the place, we discovered that one of the two flats was on fire”, an eye witness said.

“The fire was so intense that it was difficult for anyone to get close to the house. The pregnant and her husband were shouting for help because it appeared as if they could not lay their hands on the keys to the door.

“Though they both struggled to the door of the house where they eventually died, efforts by co-tenants and neighbours to rescue the duo was an exercise in futility because we were helpless.

“We must also appreciate the quick intervention of the state fire service which wasted no time before storming the scene; if not for their swift response, the entire neighbourhood could have been on fire.”
A source said the deceased couple were recently married and were expecting their first child before the tragedy struck.

Meanwhile, sympathizers were seen trooping to the scene of the inferno wailing after catching a glimpse of the charred remains of the couple.