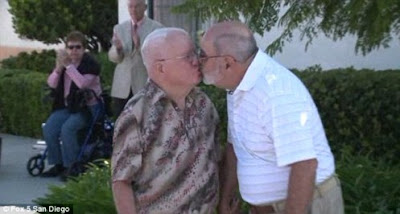 On Friday the 13th of September, a one of a kind gay wedding took place at a Senior home in San Diego, California.

The gay couple dated for 20 years before their wedding on Friday.

They couldn’t marry all this while because of gay marriage’s illegality in the state.

Recently the Supreme court made gay marriage legal in California.

The man-to-man wedding ceremony took place at their home with few friends in attendance. They sealed it with a kiss after exchanging vows. Those who kicked against their marriage simply did not attend. 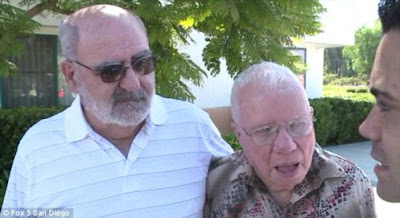 ‘It was something we wanted to do for a long time’, Mr Banvard said.

Many of the residents at the senior home were against their union.

They protested in a bid to stop it but the building management insisted the couple had a right to get married.

Watch the short wedding video below;

This is very odd.