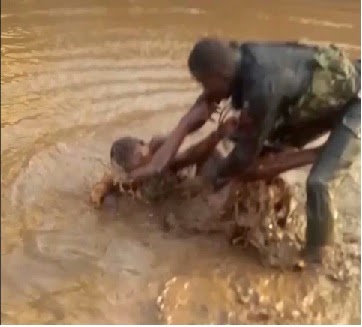 In what sources called the highest professional misconduct in the history of the Nigerian Police Force, a drunk police officer attached to a Union bank in Obalende area of Lagos state Nigeria has done the unthinkable.

The Mopol identified as Tafa Mohammed was caught on camera beating two women after a food seller refused to sell fish alone except to customers buying food with it.

The ‘no fish alone’ policy reportedly got the officer upset forcing him to unleash terror on the innocent ladies.

Tafa Mohammed, a mobile policeman, who was under the influence of alcohol took on a female customer who was buying food from the same vendor at the time he got there, and threw her into a nasty pond of putrid muddy water.

The beating took place at Lewis street in Lafiaji area of Obalende.

In the video, Tafa Mohammed is seen drawing a rifle and pointing it at one of the women, an act of ‘pistol whipping,’ and he was backed-up with the presence of a second MOPOL officer. One round of ammunition was fired into the air.

The victim who was pushed into the muddy waters suffered internal injuries.

I’m sure we’ll still hear more about Tafa the troublemaker in the next couple of days.