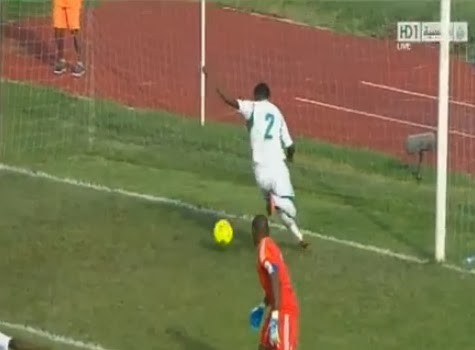 Oct 14, 2013 – Video: Goal Disallowed For Ethiopia Vs Nigeria Match – Did The Ball Cross The Line?

This is the real footage of the goal disallowed for Ethiopia Vs Nigeria match in Addis Ababa yesterday.

Ethiopians claimed the referee denied them, Keshi said the referee made his decision, adding that he thought the ball had not crossed the line.

Geoffrey Oboabona had cleared the ball off the line.

Keshi said the Ethiopians agitated for what they did not deserve.

“We have seen from television footages that the ball didn’t cross the goalline as is being agitated for,’’ he said.

The former Super Eagles captain however said the match was a good game and praised the resilience of the Ethiopians.

“I think they looked deadly and had a lot of pace on the ball, but experience and quality gave us the day,” he added.

The Walya Antelopes’ Head Coach, Sewnet Bishaw, had protested the timely clearance by Godfrey Oboabona which denied his team a goal in the first half of the game.