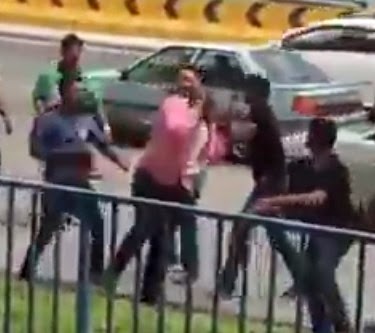 In the video you are about to watch, an innocent Nigerian student identified as Mansur was beaten mercilessly by some Malaysians who caught him while walking on the streets.

According to a source who caught the altercation on camera, the student was crossing the road when he accidentally entered a busy road that caused a minor accident between a car and a bike.

Without minutes, some bikers in the area got hold of the student and dragged him to an area where he was beaten with all sorts of sticks including bikers helmets.

As if that wasn’t enough, police were called in to the scene and he was arrested while those that assaulted him continued the attack right in the presence of police.

This hatred against Nigerians in Malaysia in becoming too much.