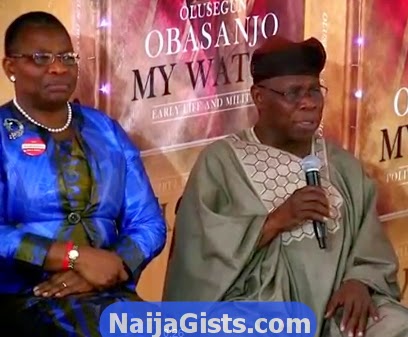 Ex-President Olusegun Obasanjo on Tuesday hoped that President Jonathan will be sanction for trying to stop his autobiography book launch.

The former president said he hope President Jonathan get sanctioned over his desperate attempt to stop My Watch book launch.

OBJ alleged that President Jonathan had approached the court and the matter was originally for hearing on December 9, the day of the book launh, but that the President rushed again to look for injunction, all out of his desperation.

Bring Back Our Girl campaigner, Mrs Oby Ezekwesili was later spotted giving Obasanjo a peck as she left the venue of the book launch

Did you hear Obasanjo’s military voice? He is definitely not pleased with Jonathan.