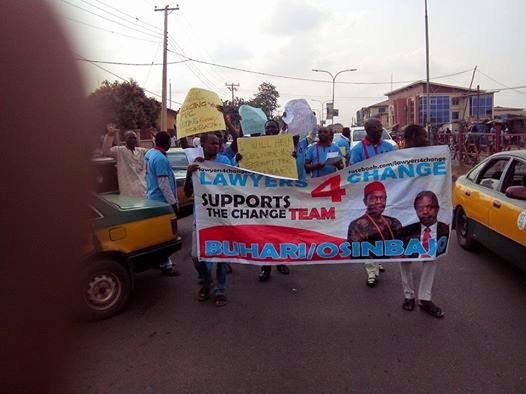 Match 6, 2015 – Walk For Change: Nigerians To Match For Buhari & APC From Maryland To Surulere Lagos

Lagosians will tomorrow, Saturday, 7 March, practically demonstrate the change mantra of the All Progressives Congress, APC, by marching for change.

The ‘freedom march’ from Maryland to Surulere, introduces a new dimension to the APC electioneering campaign in Lagos, western Nigeria.

Organisers of the event, the Lagos office of the Buhari/Osinbajo Campaign Organisation, said the walk will showcase the readiness of Lagosians and the party for the rescheduled general elections.

They called on all lovers of democracy to join party faithful at the Maryland Junction for the event tagged ‘Walk for Change’.

The walk will take them through Ikorodu Road, Ojuelegba and terminate at Teslim Balogun Stadium in Surulere. A statement by House of Representatives member and Lagos Coordinator of the Buhari/Osinbajo Campaign Office, James Abiodun Faleke, said the walk will be a psychological reawakening for the electorate and send a signal to the Peoples Democratic Party (PDP) that Lagosians are ready for the elections on 28th March and 11th April, 2015.

He said the party would not tolerate any further shift of the elections, noting that the APC walk show on Saturday is to demonstrate that Lagos residents are ready for the elections.

According to Faleke, the reports emanating from the on-going war against insurgency in the Northeast indicate that the military is winning the war, stressing that there is no reason for not holding the elections on March 28 and April 11.

“Lagos State is ready; Nigerians are set for the polls. It is in view of the readiness that we are embarking on the walk show slated for March 7.

“The walk is also to say that Nigerians reject the return to the dark age of the use of Temporary Voters Card (TVC), for the coming elections. There is no going back on the use of the Permanent Voter Cards (PVCs),” he said.

Faleke said Nigerians were aware of the machination of the Presidency to win the Southwest at all costs, noting that Peoples Democratic Party (PDP) has resorted to wasting tax payers’ money on the project.

Continue Reading
You may also like...
Related Topics:match for change, nigeria