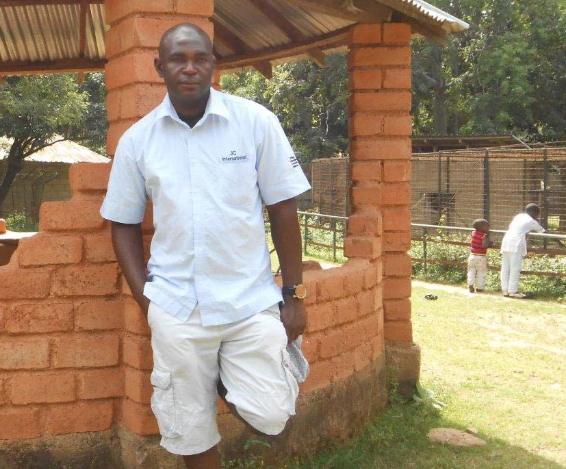 April 22, 2017 – “I Want To Become A ‘Professor Of Blindism’ Says Blind UNIJOS Graduate Who Invented Bell To Save Deaf Students

In Nigeria today, people with physical disabilities are often seen as liabilities, this is because they always need the assistance of people around them for daily activities.

This is why many people with physical disabilities often languish in their conditions.

However, the case is different for a visually impaired graduate of University of Jos, Mr Amanyi Obeya Ignatius who lost his sight after his primary school education.

Shortly after he lost his sight, life further dealt a cruel blow on him when the cold hands of death snatched his father away and left him with only the poor mother as his source of consolation.

Faced with daunting challenges early in life, one would have expected Amayi to give up hope and become a liability to the mother and the society like many physically challenged. Instead, the challenges rather became a catalyst that spurred him to strive to excel in life. 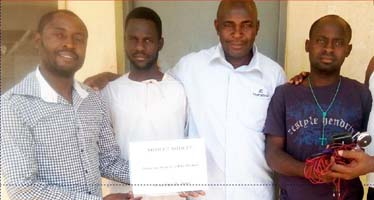 Instead of quitting his education after he lost his sight, Amayi proceeded to secondary school and from there, he moved to the University of Jos where his ingenuity opened a new vista for him.

His sojourn at the University of Jos brought him in contact with other physically challenged, especially people with hearing impairment. The encounter triggered his desire to develop a tool to aid his deaf colleagues after he experienced the harassment they were going through in the hands of people. Amanyi invented a deaf door bell otherwise known as an “OB Bell”, to help the deaf detect when there was a knock on the door.

Explaining how it happened, he said:

“I became blind after I had fever. It was discovered that I had a small boil on my forehead but unfortunately, by the time the boil got dissolved, I discovered that I could not see clearly again. I could only see shadows of images but cannot identify them. The doctors eventually reasoned that my blindness may be linked to the history of glaucoma in my mother’s family because my mum and her elder sister both have sight problems.

“Before the incident, I was writing a common entrance examination to go to St. Francis Secondary School from where I hoped to enroll in the Nigerian Defence Academy, Kaduna. I was then in St. Mary Primary School and my teachers could only pity me because there was nothing they could do. It was very difficult for me to accept the fact that I cannot see again. I continuously refused the offer to study with the visually challenged in the school I was taken to and that really delayed my education.”

His desire for education was later awoken by to his old schoolmates who refused to leave him to wallow in self-pity. Amanyi’s words: “They would retire to my house and give me feedback about what they had learnt in school. Gradually, I became challenged and my interest in education was revived. Sadly, I had to now do this with other visually challenged students.”

Amanyi thereafter went to rehabilitation classes where at some point, he also studied with some other children without any physical challenge. He grew in his study and was admitted to the University of Jos where he bagged a degree in Special Education for the visually handicapped but not without some challenges.

“It was not easy studying at the University of Jos. I had only my elder brother who also has his own family to help me but I became very fortunate when I had about the MTN Foundation scholarship for the blind. My friends told me about it and I went ahead to enter for competition. After the screening, I was very glad when I was contacted to have been successful but the scholarship meant I must maintain a 2.5 CPGA every semester to continuously to be eligible till I passed out,” Amanyi said.

With gratitude, Amanyi is thankful to MTN Foundation for the scholarship provided for him to pursue his career and achieve his dreams. “I could describe my scholarship as God-sent. The foundation has treated me like a child by providing me with money and materials. Through the scholarship, I was able to buy my computer and also networked with organisations like Anglo-Nigerian Welfare Association for the Blind (ANWAB) which assisted me with the installation of the JAWS software for the blind which I used with my computer. I have also been equipped with some entrepreneurial skills; so I render a few other services with which I support myself on another front,” he revealed.

Although, he is not desirous of personal acknowledgement, Amanyi is appealing for investments from private individuals and the public into his OB Bell project as he believes the improvement of the functionality of the equipment as well as production in mass quantity will cater for the deaf in the society.

He said: “I am not really looking for fame but just to fulfill my dreams of helping others who are physically challenged. Having been able to come up with this device, I will be glad if the deaf in our society are made happy, at least if they cannot speak, they can see and feel. The device is not perfect yet, but I am looking forward to technical partnerships that will help improve the device.

“I want to become a ‘professor of Blindism’. I read materials on it online and discovered it is an aspect that is still less-researched. Blindism deals with behavioural characteristics of people with visual impairment that is not commonly attended to but is affecting the blind. All I want is a world of equal opportunities where despite any form of challenge one may have, he can still stand a very good chance so long as the society is willing to provide the needed support,”.

Continue Reading
You may also like...
Related Topics:Amanyi Obeya Ignatius, professor of blindism