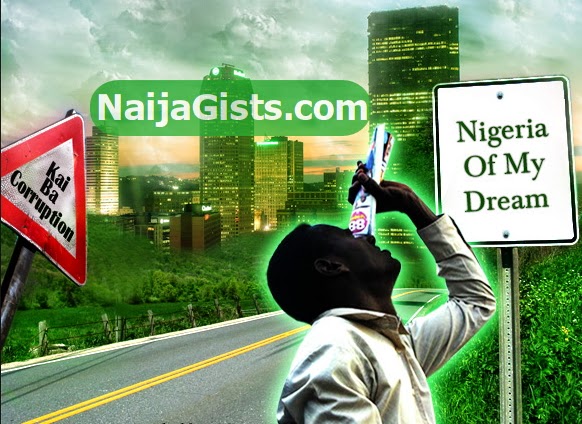 I relish the thought of a Nigerian dream though I’ve not grown to hear one. I grew up along with my peers at school celebrating the American dream and the hard work of the founding fathers of America who took their time to create a road map for future generations many years to come. We were here in Nigeria and we knew so much of the American dream but we never heard of a Nigerian dream that our founding fathers had set for us.

My mental picture of the Nigerian dream was only its use as a topic to attract essays from students of our secondary and tertiary institutions. I never heard government speak so boldly about such a dream until recently when I heard it exist on television political campaigns of Politicians. I am disillusioned by the un-substantiating of this dream on paper for my fellow countrymen and I who want a platform upon which we can propel the next big move towards the dream’s actualization.

The question that often pummels my thinking faculty when I notice the wanton waste that characterizes the Nigerian system, the seemingly no destination zigzag motion and the sarcastic unplanned direction that our leaders expect we take along with them is “was there really a Nigerian dream”?

I’ve heard statements like “dreams of our founding fathers”. In actual sense, the knowledge and understanding of what the dreams entail is beyond near knowledge. Our past leaders and founding fathers should have written them down and ensured they were stored as national monuments to be read as often as possible as we can on our local mediums. Those men were just too busy with fighting for power bloc and resources for them to have cared so much about the future generation.

Did our past leaders even have the capacity to dream? The obsession for independence had overshadowed the thoughts of our founding fathers. They had failed to plan towards the future. They left no goals and no ambitions. They were so engrossed with conditions for unity that they had no plans for the years after they decide to forge a united front. Though they toiled so hard to have their desire achieved, beyond the desire, they towed the nation to a dead end.

If there was a dream, our nationalist would have focused. They would have seen the Nigeria great of the future years and they would have sacrificed so much to keep the unity for the dream. But no, there was no dream except for the selfish interest of individual leaders who saw their own as the common good, the reason for leadership tussle just a few years into independence.

True, the world knew Nigeria was an emerging giant. Her talents, capacity and resources were matchless. Our fathers had this knowledge too. They saw possibilities of immediate benefits but there was no concrete plan for the future. They only looked at the present gains of their day and beyond that, they left the future to those who would leave in it.

The years that followed independence proved how futile the effort of our founding fathers were. Though we had gained independence from our colonial masters, we had failed to get independence from Mr. dreamless. He mocked at our leaders as they danced to the joy of independence and waited there at a corner for the future when he would be needed and would not be found.

The last time there was a dream, it was the aspirations of the colonial masters to make enormous profit from the sufferings of our fathers. Our colonial masters built railways, established religion, introduced formal education, built roads, created sea ports and built hospitals in our land, all of which to aid the development of their own economy. Our fathers thought they were wise and had won against our colonial masters when they got independence but they failed to acknowledge that the man who has dreams never loses. Our colonial masters have continued to benefit from their investments many years after while we still suffer from all our wealth.

If there was a dream, we would have developed an advance train service since 1960. Our train lines still bear the marks of colonialism while nations with dreams have evolved and are now running speed trains. We still struggle to produce sufficient electricity because our fathers failed to acknowledge that our population would never be stagnant with our high birth rate. They failed to project into the future until the future met us gaping.

Each government after independence proved how thoughtless a life without dreams could be. They could not correct the mistakes of our founding fathers or they were too daft to discover there was even a mistake made. They rolled policies without dreams and their policies failed to make impact in this realm. They moved like cows being controlled by a force they lack idea of. They accepted every whim and caprice and made themselves laughing stocks for the world of men with dreams.
Leadership through the years has lacked inspiration. Dreams arouse inspirations. Our countrymen have been led like cows to the slaughter without mooing a word. Creativity lost its value and our little ones who had the ability to dream found solace in the land where men dream, America and Europe. Our inspired ones became objects of celebration in faraway lands but they hardly got a welcome at home. The reason is, our fathers never dreamt.

Anything goes and we accept half filled cup when we can afford a full cup. We celebrate awkward achievements when the men worthy of celebration hardly are known, I mean the men who really have dreams. If there was a dream, there would have being a standard for everything we do. We would have being building standard roads to last 40 years and buildings to last 500 years. But no, it’s not possible to the dreamless man who only sees the good of his own pocket only.
If truly there was a dream, our country men would have being way too busy pushing to see its realization. Rather, they are busy fighting over plots of land and killing themselves over political votes, a proof that our fathers never dreamt.

Our family values are dead, our traditional values are lost and even our languages are hardly used in formal circles while we value the cultures of the men who could dream. By now, we would have upheld the sanctity of our cultural heritages over that of others; our languages would have been accepted global lingua franca. But no, this could never have happened in a land where our fathers never dreamt.

The men who showed signs of dreaming were killed or maimed. They were too odd for our fathers who never believed a black man could have the capacity for brilliant thoughts. Our fathers were too rigid for change and change never came. Change died along with them never to showcase its handsome head.

Rather, our fathers accepted mediocrity, celebrated them and passed same to us.
Now, our children are all over the place being couriers of drugs, internet imposters and murderers. They are found in every prison on earth. The number of our sons and daughters in prisons abroad has surpassed the number in our home penitentiaries and we stand helpless about it. The only reason is because our fathers never dreamed. They never saw the repercussions of their actions beyond their time. They thought they could have their way, but the way has refused to have them.

Did the essays to define Nigeria’s dreams start today? No. Our elite brains tried to help us define the path that would help us head towards success. Our sons and daughters had being writing essays upon essays since the nation’s inception. But our founding fathers only mused at the thought because the children, the ones who were having the dreams had no grey hairs. The essays were celebrated and then thrown into dustbins or left in shelves.

Our young minds are tired of dreaming, our hands are tired of writing. Our young ones should have been living in dreams by now but the dreams never existed and now they have to start to dream again. They have to dream of the high risings, fast speed trains, mega cities, industries, wonder schools, super highways, a united nation, modern health facilities, constant electric power, creative entrepreneurial countrymen etc.

If the future must have the best of today, if we must stop the mistakes of our fathers, we must begin to dream, write the dreams and act on them. We owe the future generations a better future, we owe them the best dream, and we owe them the Nigerian dream.