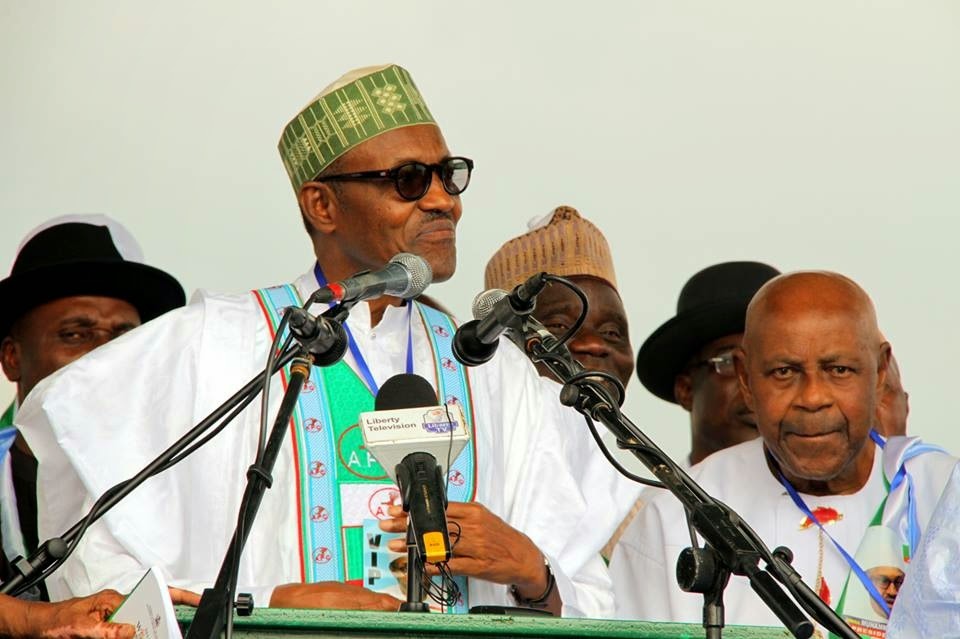 December 1st, 2014 – A Message to General Mohammad Buhari of APC: Pick Your Running Mate Base on the Candidate’s Competence, Characters, Visions or Ideas, Experience, Intelligent, Record of Achievements, and Integrity By Omokehinde

Some concerned Nigerians are of opinion that General Mohammad Buari is too old to be an effective president and Commander in Chief of Nigerian Armed forces. I totally disagreed with such notion because one of the finest and highly successful American presidents ran for his second term in office at the age 72 in 1984. That was president Ronald Reagan of the United States of America. He did many great things for his nation and American People after he was reelected in a landslide victory. President Reagan later died in 2004 at age 93. According the Holy Bible, “Gray hair is a sign of wisdom and not foolishness”. Some also argued reasonably that positive transformation and good governance can only be achieved by electing a young, vibrant, and well educated person as Nigerian president. We tried that ideology by electing president Jonathan in 2011 election, the results was economic disaster, insecurity, mismanagement, mass murder of innocent Nigerians by Boko Haram, corruption, money laundering operations, leadership failure; lack of economic agenda; election fraud, and intimidation of opposition by security forces just to mention a few.

In addition to that, General Mohammad Buari selection of his running mate is as important as voting for a president by the electorate. Why? Because the vice president selection should be based on the Candidate’s competence, discipline, and his/her ability to hold the position of presidency in case something happens to the president in case of any unforeseen circumstances. APC as a party should allow General Buari to choose his running mate without any interference from the party high ranking members. After all, Democratic party in the U.S allowed president Obama to freely choose his running mate against the party’s favorite – Senator Hillary Clinton in 2008 before American presidential election. President Barack Obama choice of Joe Biden was one of his best decisions as the first elected black president of the most powerful nation on earth. General Buari should avoid trap like that set by former president Olusegun to then candidate Yaradua by imposing unknown governor on him as his running mate in 2009. The General should pick a man of great vision like him as his running mate. The Bible says, “Where there is no vision, the people perish. ” Proverb 3:15. Also, APC should avoid nominating vice president Atiku Abubakar as its presidential nominee for the 2015 election because it is almost impossible for Mr. Atiku to separate himself from president Olusegun Obasanjo recklessness and many election fraud recorded on his watch. However, it is important to note that Obasanjo/Atiku administration kept us safe from any form of terrorism. There was no bombing and mass killing of innocent children, fathers, and mothers on their watch.

Furthermore, General Buari has the privilege of choosing a credible, competent, patriotic and a well- qualified running mate from the three southern regions of Southwest, Southeast, and Southsouth of Nigeria. To be honest, he doesn’t have to pick a politician as his running mate just as he did in the last election. He can even pick a successful business man that has no corrupt tie with any of Nigerian past administrations. He can also pick among those successful governors like Fashola of Lagos state, Okorocha of Imo state, Adam Oshiomole of Edo state, Rotimi Amaechi of Rivers state and many more. He can simply pick a credible and competent candidate from any of Nigerian universities and colleges.

At this critical moment in Nigerian history, Nigerian people must shun tribalism, religious intolerance and bribery on election day in order to avoid the mistakes of the past. It is true that president Jonathan cannot be blamed for all our problems as a nation. But he had made Nigerian bad situations even worst because of his lack of purpose, leadership failure, gross corruption and incompetence of the highest order. In my view, I believed that the president has failed Nigerian people for two simple reasons: First, the president surrounded himself with bunch of corrupt and unpatriotic politicians such as Reuben Abati, Doyin Okupe, Pius Anyum Pius and many other that care mainly about their various pockets. Here this, “He that walketh with wise men shall be wise: but a companion of fools shall be destroyed.” Proverb 13:20 The second reason is that president Jonathan was never ready to govern a diverse nation like Nigeria. He is incompetent, and lack those great qualities of Commander in Chief. Right now, one thing Nigerian people should demand from president Jonathan is a free and fair election without any election fraud, voter’s intimidation, and harassment of opposition party on the election day. If this happens, I guarantee all the patriotic and peace loving Nigerians that a new president will emerge come 2015.

In the end, it is sole responsibility of General Mohammad Buari to choose his running mate based on qualities he want in his vice-presidential candidate. The issue of Muslim Muslim ticket or Christian Christian ticket should be disregarded by this great Nigerian citizen. After all, who among Nigerian today’s leaders exhibit those characters of good Christian or Muslim? None of the two religious tolerates embezzlement of public funds, corruption, leadership failure, incompetence, mismanagement and other unpatriotic behaviors of many of our criminal politicians. As for me, I would rather work with a man of great characters than working with a deceitful person who claimed to be true a Christian or Muslim. The most important thing Nigerian people are crafting for at this point is good governance with people’s oriented policies that will improve our standard of living, provide adequate security for Nigerians and our properties, create good paying jobs for millions of our unemployed youths, rescue our falling educational system from total collapse, rebuild our decapitated infrastructures across the nation, tackle corruption from the top to bottom, provide stable supply of electricity, and improve Nigerian shattered image abroad. In my view, General Mohammad Buari is the most qualified candidate for the job. He is a man of noble characters, competent, patriotic and a man of integrity that will channel our nation back on the right track. A highly respected and patriotic Nigerian with no element of tribalism in him. A former Military Head of State with the right experience and knowledge to destroy all the activities of Boko Haram insurgency in Nigeria by capable Nigerian Military.

In conclusion, no matter whom the General pick as his running mate, some people or section of the country will not be satisfied. That should not come as a surprise to anyone because no man has ability to meet the needs or demand of millions of people with diverse backgrounds. But the most crucial thing in the next election is for us to send this failed and corrupt president back to Bayelsa state. We cannot expect a different result from a man who had almost six years to deliver but failed miserably. Nigerian voters should shun tribalism, religious intolerance, and other difference that divide us as a nation, and we must team up together to change the destiny of our beloved nation from president Jonathan’s disastrous agenda by electing a new president next year. A word is more than enough for the wise. We should always remember that Nigeria is the only country we can proudly call our own. And is our collective responsibility to help Nigeria to remain peaceful, prosperous, and united. Thanks.

[About the author: OmoKehinde writes from Lagos, Nigeria.]