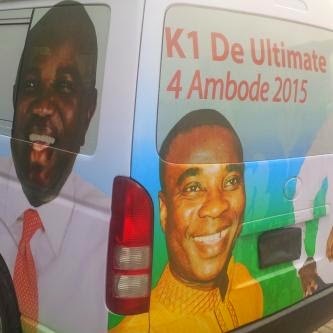 In furtherance of his support for the APC, Fuji musician, King Wasiu Ayinde, aka K1 The Ultimate, was the cynosure of all eyes, last Sunday, as he donated some Public Address Systems to each of the 377 Wards in the 57 Local Government Councils and Local Council Development Areas (LCDA) of Lagos State. The artiste, who also gave out 300,000 wristbands with the imprints of Gen. Buhari and Ambode, told journalists that it was the least he could do to support the two APC candidates, as a party member.

What informs the donation of these items?

I am a party man, and in the last 16 years, I have been part of good governance in Nigeria.  So this is not really too much to be given out to a party that I believe so much in. I believe so much in the All Progressives Congress; it is a party of the people. My relationship as a democrat has been for over 40 years. This is what I believe in, regardless of anything.

Why the choice of APC?

I am a Nigerian. I have the right of affiliation, so that is where it started, and it doesn’t change for me.

Why the choice of these items; why not something other than wrist bands and Public Address Systems?

In the first instance, we are talking about the grassroots. When you are being asked what you were doing; ensure you do something that touches the grass root. This public address system is meant for the world; it is a public address system that has the capacity to run for over 48 to 72 hours without electricity, meaning that it would be very effective in the rural areas. If you can charge it for just an hour or two, then you can use it for the next 72 hours. Each system comes with a microphone, not only that, it can be used as a DVD, depending on the format of information you want to pass across to the people.  If the governor wants to make a statement or give any information, it reaches out to the people fast, clearly and soundly too.

Is this kind of gesture going to continue?

This is not my first donation to the party, and by extension, to good governance. As a democrat, I have always made myself available, lending my voice and music to good courses. During the last election, I know what I did. During every election, I try as much as possible to reach out to people. I am a beneficiary of good governance myself, and everybody knows that.

How much of these have you been able to impact on your colleagues?

This is a matter of choice, and it is about me. I don’t want to speak for anyone. I can’t force anybody; not even my children. This is democracy where people have every right to do what they choose. As I am saying mine, others might be saying theirs as well. This is just about me.

Can you tell us how much you spent on these items?

Unfortunately, that is also personal to me. I don’t need to say it for any reason. Not even to earn applause. Sometimes it doesn’t make meaning.

What would you want the people to know about the coming elections?

Every Nigeria should know that this coming election is very important in many ways.  Nigeria is not enjoying the benefit of good governance as passionately as expected. If you take a look at Nigeria over 30 years back, then you will know that the rate at which people move out of this country to either work or live abroad is crazy, and this is simply because there is nothing for people to do at home. Majority of the people are not truly enjoying good governance, and we should not shut our mouth to this. I don’t know of any other, I’m a global tour musician and I see many people outside the country that when you ask them why they are living abroad, they will tell you it is because they have nothing really good to do at home. They will tell you they will rather be here (abroad) sweeping the floor than being a thief back home. You can imagine that it is as bad as that. The people are not enjoying, the education system isn’t functioning well; you can imagine a situation where by nothing works. And if they say something is working, let them (the ruling party) show us what has worked. I am speaking this time around as a Nigerian, who has seen things clearly in the last 40 years. I have been a party member for a very long time, I had been voted as an executive of the youth wing of a party in Nigeria, when I was barely 17 years old. My history as a politician is something that has existed for a very long time.

As a global person, one of your contributions to global tourism is Ori Omi project that you’ve been doing in US. We see a lot of waters in Lagos as well are you thinking of doing this kind of project in Lagos?

Before we started those ones you mention, we have been doing it in Lagos here. We used to do it from Mile 2 to Apapa. In the late 80s and 90s that is what we do; we do go from Mile 2 to a Badagry. All we are saying is that, when everybody knows that things go well in Nigeria, nobody would want to take those brilliant ideas abroad. The security situation in Nigeria is nothing to write home about. If Nigeria has a security situation where by they can ‘close their eyes’ and walk the streets 24 hours nonstop; if they can walk without molestation, then you will see that those beautiful things people go abroad to enjoy will be established here and Nigerians will stay to enjoy them as well. Who wants to go on the water here when there is no electricity and security?

Doesn’t it bother you that some people may feel you have been paid to support the APC?

Definitely, I am blessed with my job. How could anyone look at me; a 58-year-old man, and say I have been paid? If I don’t know what bites so hard in the society at 58, why will I be able to go out and talk? When I made my album in 1984, I sang about poverty, lack of electricity and so on. That was a long time ago. Definitely, these problems have existed for long; they are only getting worse by the day. So, would anyone say that I was also paid back then to sing against vices in the society? As musicians, we are not destabilizing the nation, we are only crying out loud to make the country better. If you go to Benin Republic, you would know they are enjoying the benefits of good governance. People living over there don’t waste money on power generating sets, the way we do here in Nigeria. And they are not really a rich country, as the only thing they do is business, with just one Port.