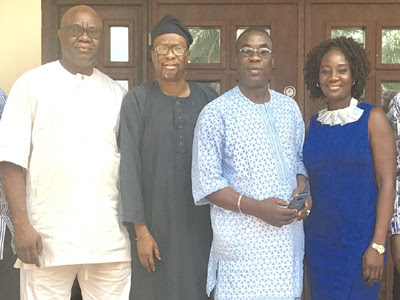 The appointment was conferred by the Coalition of Civil Society on Sustainable Development (CACSDG), Ogun State Chapter, was in recognition of the music Legend’s contributions to social cans cultural development of Nigerians, Africans and the diaspora.

Presenting the appointment letter during an advocacy visit to the music mastreo at his ijebu Ode, Ogun State, country home Yesterday (Monday), the Coordinator of the Coalition, Ms Moji Akinsanya, explained that SDGs as global goals to improve quality life of the citizen through needed collaboration of all stakeholders to pass the message, and also support government in the realization of good governance.

While, extolling the creativity and innovative music of K1, who has dominated the music scene over four decades, a Consultant on SDG, Mr.Tunde Oladunjoye, said K1’s music has over the years, changed the perception of the masses for positive lifestyle, patriotism and hard work, hence his choice as UN-SDG Champion

Responding, Olasukanmi Marshal, K1 de Ultimate, endorsed the SDGs and commended members of the Civil Society for their roles in developmental agenda, assuring that he would use his God-given talent to promote the ideals of SDGs.

The formal decoration of the SDG Champions will hold during the international stakeholders Conference on SDG (ISTACON-SDG 18) to be hosted in Ogun State in March.

The Conference with the theme “Achieving SDGs in Ogun State through integrated and innovative partnerships” would bring together Government Officials, Civil Society actors, the private sector, academia, media and other non-state actors.