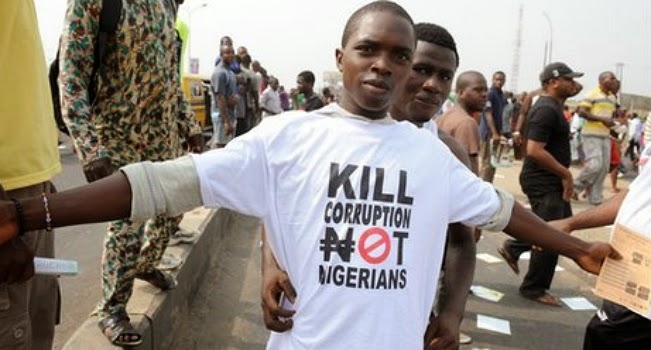 I watched a comedy skit featuring one of our foremost comedians performing before an international crowd of spectators in London lately. It was hilarious, jaw breaking but thought provoking. While the comedian tried to create a hilarious picture of Nigeria’s corrupt situation, he was like his contemporaries selling the nation out by innocently ascribing the corrupt situation to the generality of Nigerians rather than a handful of persons.

We are Nigerians, we are not corrupt. We are only being led by a chain of corrupt cabals who wouldn’t allow the generality of us profit from what should be ours. We are only privileged to have what falls from our masters’ tables, the crumbs I mean and like our ogas at the top struggling amongst themselves with the big pie, we are forced to struggle for these crumbs.

Those who are describing Nigerians as corrupt are blind. Of our over 200million population, about 80% of us are farmers tilling the ground from where we survive, 19% are those who work in private sector driven businesses, just 0.9% are those who work in government parastatals and agencies, politicians are 0.09% while rogues and criminals are a minuet 0.01%. The bulk of the nation’s wealth is in the hands of a small percentage, the later three. They are the ones that have tainted our nation’s image by their unparalleled quest for wealth they haven’t labored for.

Describing Nigerians as corrupt will be unfairly treating the sheep for the act of one goat that has strayed into the pack. We are hardworking and creative, ingenious and inventive, diligent and resourceful, firm and thorough, capable of initiating great ideas for the world. We are proud of our heritage, propelled by passion, engineered for possibilities and turbocharged to achieve great things.
Those who sell us out there to the world are the corrupt ones. They lack any iota of truth in their lips. They seek to satisfy their pockets only even if it means spoiling our collective image. They steal our wealth abroad and create industries there to employ other nationals, they open accounts in foreign lands rather than having them in Nigeria’s shores for the development of our economy, they send their kids to study abroad rather than developing our home schools, they cheat us at every instance while the good people of this nation stand mouth agape watching.

These men are the ones who get free passage through airports as often as they travel without being checked while us who only merely have a chance to see the world outside our land are screened thoroughly in the name of corruption. Who is fooling who?
We are not criminals, we are not thieves. We are a bunch of passionate people ready to die for our nation if that is what it means. We are ready to lay down our lives however we won’t. We want to live to see this injustice quelled for our children and posterity.

We might join the world at laughing at the satire that our comedians find delight at telling. We may seem to be the happiest at easing out what hurts us most but the bitter truth is the silent tears we shed every time we feel the effect of the negative tag placed on us in lands beyond ours.
Our yellow and white brothers in lands beyond our shores acknowledge themselves, that they propel our corrupt ones. They open their shores to our wealth and cry foul to wash their hands off their illicit dealings. They share in our dirty oil deals; they help our criminal gangs with arms deals. Yet they cry to the world of the extent of our corrupt nature.

Nigerians are saying no! Our sons and daughters scattered round the world are living legal lives in their countries of abode. They are paying taxes and adding to the economies of their nations of abode. They aren’t criminals, they aren’t corrupt. They own businesses and keep the laws of the land in which they have accepted to live in, they are responsible.
Those who have given this nation the bad image are only a handful of us. They have stained our white linen with their black stains. These handfuls are found in every society, economy, tribe and people. Our accusers themselves know they won’t be telling the truth if they make claims to their nation as being clean without that corrupting handful.

We may have corruption scandals rocking our government pinnacle and we are not keeping quiet about them. We are vigilant, watching for opportunities to bring them to global knowledge. Maybe that’s our mistake. We have being too open about our problems and the world is seizing on that against us. But it won’t stop us talking because we want the best for our land.
Those who represent us must represent us right. They must acknowledge that we as a people determine the future and not their own personal cabals. If our nation’s bigwigs were sincere to themselves, they would by now have realized that the nation has not made any progress since they formed their tyranny programmed cabals.

We want corruption out. We are determined to kick a mess of that guy called corruption. He has bullied us too long, we are not ready to give in. we will fight with our whole hearts till the victory is won.
We are Nigerians, we are not corrupt. We are tenacious, concrete, and propelled to be global players in everything we do. We visualize, taking the future into our hands by our sincere actions. Nigerians and corrupt, are not synonymous.

The time has arrived for us as a nation to climb over our challenges. We must wake up to this call to keep the sanctity of our land and us who live in it and to share same to the world. Our media enclaves must project the nation’s good by projecting much of our good natured attributes. We have 199 million good citizens with great attributes to share to the world than the acts of just one million of us.

We must begin the process of disabusing the minds of our zealot enemies who are determined to ensure we remain in the world’s black books when they are themselves not free from the same mote they are striving to remove from our eyes.

Our privileged international travelers must realize that they are our ambassadors. They bear our Nigerian identity and represent the whole nation even if they have chosen to make their journey independently. They must act in a manner as to protect our nation’s interest and project the positive qualities that are Nigerian.

We must show perseverance and strong confidence in our believe as Nigerians. However far we travel to, we will only have one home, one country to whom we call our own, a dignity that will only be Nigerian and for Nigerians.

However our corruption and crime ratings, it happens everywhere. We will not lose our sleep or identity because some guy thinks we are Nigerians and therefore corrupt. We will hold firmly to our resolve to represent our individual selves and our collective whole as a nation in the most just of manners.
We have lost opportunities that could have come to us as a people because the world painted us as corrupt. We’ve lost creativity, investments, and support. But we’ve being resolute defining who we are by what we see ourselves to be, our defiance and courage in the face of entangling challenges.

That monster that has given us this tag isn’t human. He is right inside the men who have allowed greed rule over their capacity to think. He controls them at his whim and throws them in the direction of his caprice.

It’s time we told the monster to go. Its time our brothers who are opportune to sit on our nations opportunities see themselves as servants as they’ve been called. The monster only quits when one serves. The monster understands a servant service. However if you choose to go on your head, he is going to axe you some day.

Though as Nigerians, we are not corrupt, those who lead us are. It will be affirmative to say that where the head leads, that’s the direction the legs will go. These gives credence to the global assumption, that we are a corrupt people, even though we aren’t.

We don’t need people up there who think themselves as the ultimate good. We don’t want selfish leaders who will store our wealth in personal overseas accounts. We need men who can stand for the sake of this nation to defend and develop it into the yearnings of our future today. We need men whose credibility has no stink, men with proven integrity and staunch financial chastity.

Will we ever find such men in a polity where money goes first before opportunity? Will those with such records have the finance to run for political position? We will be waiting forever for the answers.

Continue Reading
You may also like...
Related Topics:2014, corruption, Nigerians