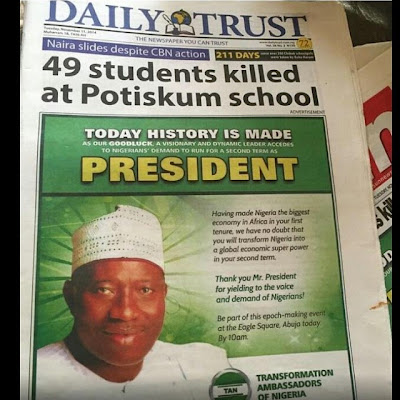 Nov 11, 2014 – What History Did President Jonathan Make In Nigeria Apart From Boko Haram??

One of the dumbest headlines in media history in Nigeria has been uncovered.

Check out the paid headline story of Daily Trust Newspaper above (Yes it was sponsored by Transformation Ambassadors Of Nigeria, an organization sponsored by Jonathan to aid his reelection)

After promising Nigerians he’ll not run for reelection back in 2011, Jonathan today declared his intention to run for 2nd term at the Eagle Square in Abuja. Is that the quality of  a true leader?Of course not. 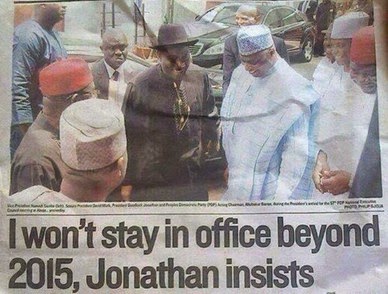 Is it that many Nigerians preferred to be told lies… Please we need an answer, what history has Goodluck Jonathan made apart from the incessant attacks by Boko Haram terrorists that has dominated his tenure.

Truth be told, Jonathan administration has made no positive history in Nigeria.

Boko Haram is taking over the entire North and we are calling it history.

During his tenure, Boko Haram has gained ground and has established an Islamic caliphate.

They have captured several towns in Adamawa and Borno State and they are still advancing.

They have seized several weapons from the military, over one million innocent Nigerians have died.

Continue Reading
You may also like...
Related Topics:history, jonathan, nigeria