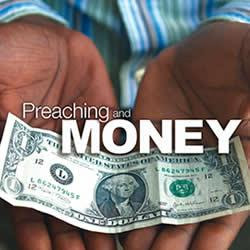 November 8, 2016 – When Church Leaders Step Out Of Line, An Article By Tony Ogunlowo

In writing this article I’ve been advised to tread carefully so I do not tread on the toes of certain powerful ‘Men of God’. Naturally I would be scared of a true ‘Man of God’ but not a charlatan.

Disregarding whatever potential threat there are I will present the truth as I see fit. It is the Readers right to discern between right and wrong.

In recent times a lot of so called ‘Men of God’ have been side-tracking their primary duties in favour of chasing after things of a material nature.

A ‘Man of God’ is supposed to be a representative, and servant, of God in this world. Such a person would have given up everything to devote his or her entire life to the worship of God. There can be no room for things of a material nature – money, business, etc – to distract them from praying, meditating and teaching the word of God. It is one of the reasons that the Catholic Church insists its priest remain unmarried and with no world possessions.

To be a ‘Man of God’ is a calling whereby the individual devotes his entire life to the service of God. It’s not a job. It’s not the means to enrich oneself or to get up to all sorts. No so-called ‘Man of God’ is God but is supposed to be a servant of God, channeling his wishes. Those that think they can act like the Almighty playing judge, jury and executioner are blaspheming themselves.

The new age Christian leaders, a law on to themselves, have turned themselves into flamboyant life-coaches who are more intent on making money than saving souls. Has anyone ever seen a Muslim Imam driving around in a limousine or travelling around the world in a private jet? Has anybody ever seen a Hindu Holy man dressed in designer suits or a Jewish Rabbi who is more interested in his business interests than his followers? The answer is a resounding ‘NO’.

We Christians are quick to judge and condemn other people’s religions as being inferior to ours but at least they have the decency not to turn their religions into businesses. Other religious leaders live very frugal lives – some in abject poverty – which they believe is in accordance with the will of their Gods. Only we Christians have the audacity and total disregard for our religion for some to turn it into a money-making machine.

A majority of our so-called ‘Men of God’ live champagne lives at the expense of their followers. A church leader with multiple business interests will have little or no time to concentrate on his real profession of preparing sermons and counselling people – unless of course they are snake-oil merchants or charlatans!

A church is a place of worship and not the foundation stone for launching a multi-million dollar business empire. You cannot worship God and Money. It’s got to be one or the other. Any ‘Man of God’ who’s in it for the money should take off his dog-collar renounce his ‘pastor-hood’ and become a bona-fide businessman.

In doing so he’ll have to raise his own capital to start off in business, not using the tithes collected, and pay tax on his earnings!

Currently a controversy is brewing over how much a certain ‘Man of God’ is charging as fees to attend one of his institutions of higher learning. This same ‘Man of God’ has even gone on further to threaten the wrath of God on anybody who criticizes his decision. To start off with, I don’t think God Almighty, personally, would be pleased that a mere mortal is using his name in vain in a petty matter of school fees.

One should point out that there is nothing wrong with a Christian organisation owning an educational institution. It’s the running of such that should be brought into question.

The Catholic, Baptist and Anglican churches all run schools but you don’t see the Pope or the Archbishop of Canterbury personally running them; they appoint independent managers who report directly to the governing board of the church.

Also if a church organisation run by these ‘Men of God’ are not-for-profit ventures how come the fees they charge to attend their institutions of learning are out of the reach of the parishioners who contributed the tithes to build them in the first place? Can’t there be any concessions for them to pay a lower rate? Does it all have to be about money?

I know I’ll be vilified for saying this but it’s high time all these so-called ‘Men of God’ gave up their money-making ventures – if they honestly can – and concentrate on being what they currently pretend to be. There’s no point in being one of the richest pastors in the world if you can’t save a single soul!