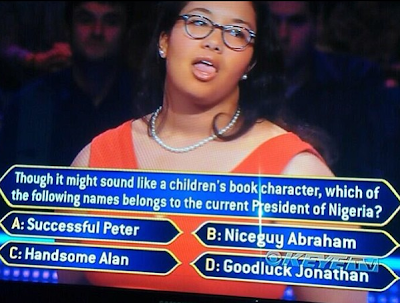 April 23, 2013 – Who Wants To Be A Millionaire:”Goodluck Jonathan’s Name Sounds Like A Children’s Book Character”

Above is the screen capture of a question answered during an episode of Who Wants to be a millionaire.

Though it might sound like a children’s book character, which of the following names belongs to the current President of Nigeria?

Is this a joke or something…..

Bet me if this happens in the Nigerian version, the show might be cancelled

Continue Reading
You may also like...
Related Topics:book, character, children, Goodluck Jonathan, name, nigeria, president, who want to be a millionaire