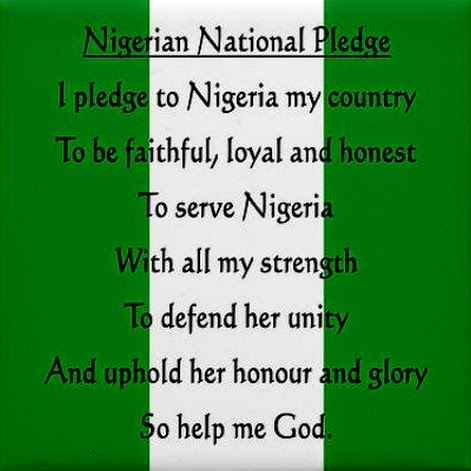 I still remember vividly those days as a pupil on the assembly ground of my primary school where my teachers taught us the national pledge. It was often said after the national anthem with the teachers’ eyes roaming around looking for that scapegoat whose mouth wouldn’t move. For those of us who were “sharp brains”, we’d shout the pledge at the top of our voice in fear of the teachers’ cane.

However, there were others who often fell prey to our teacher’s claws. Either they had not memorized the pledge or they had refused saying it. They were considered as dumb headed and unpatriotic and the teachers’ cane would roll over their backs. We said the pledge with all our hearts and passion that you’d hear us distances away. To our little minds, saying the pledge was our own little way of showing how much of Nigeria we loved and would give ourselves to protect her.

Today, many years after, I have seen that passion fade. I’ve watched with keen interest the monetization of our national heritage. Our armed forces, the ones we used to adore and wished one day we would be opportune to join its ranks no longer bear that pride. Time was when she prided herself as Africa’s strongest army showing experience in lands beyond our borders. Today the obvious truth is clear for all to see, the pledge has lost its worth and value.
Recent deserting of battle zones by our military officers engaging Boko Haram are proof of the steps of a faltering giant. The pledge our now fallen heroes once made to serve this nation are now forgotten words.

They promised to die fighting but now our defenders can hardly face the sound of bullets. They live questions waiting to be answered, if Nigeria will ever get through another civil war in case it happens.
Our government ran hospitals beat our imagination. The doctors and nurses who once pledged to serve the nation by providing quality health service whenever they are called upon to hardly provide anything close to fair. They act without hearts and pretend to be kings even in the face of dying patients. The result is the turning of our government hospitals into death zones without anyone querying the cause of such deaths.

The lackadaisical attitude of our medical personnel leaves us asking if they really understood the magnitude of the pledge they once made to serve the nation with all their strength. It makes me wonder why doctors whose duty it is to save lives should give up their patients putting money first ahead of life.
It is saddening to note that those who were the propellant of this generation’s passion to serve and to make this pledge, I mean the teachers, are the ones who now abuse the pledge the most. Our teachers and lecturers vowed to supply the nation with quality education, seasoned leaders, technocrats, scientists, lawyers, engineers, teachers and the best of every profession. Well, the nation has failed to develop the quality of work force that it needs to propel her development, a proof that our teachers have failed the pledge.

Engineers who had grown with the pledge, the pledge to provide the country with the right technological framework, infrastructure, roads, houses, vehicles, etc. to ensure Nigeria grew to the point where they cold parley with the best of the world, can hardly design. The quality of our transport infrastructures, buildings etc all attest to the failure to keep to the pledge.
Those Judges who seat at the bar who should be the ones who understand the extent of meaning of the pledge violate it with impunity. They put money first ahead of giving right judgment. They never think of the negative repercussions of a state without a defined legal system that works. Their filthy lucre gaze destroys the nation’s quest to have the rule of the law, leaving the nation basking in unwanted lawlessness, a proof that the pledge has being bridged.

Who will feed our nation? Where are the farmers who once tilled our vast land? They’ve since declined. Gone are those days when our farmers pledged to feed this nation. They hardly had motorized machines and fertilizers yet they fed the world. Today they have rushed to the cities in search of brown pastures. Our increasing dependence on foreign food imports is proof that our farmers have failed the pledge.
Our news men and communicationists of repute once protected our nation’s image. Everywhere they went, they doled out phantoms of praise for our people and government. Nigeria to the world was the perfect place of abode and a tourist destination for all. She was the focal point of global attention and our news men did the best they could to sell us right to the world. Today it’s the opposite. We have being sold out. They world know only the worst of us, a little population that naturally shouldn’t count. They have now failed to project the hustles of the enormous talents that are working their way each day purposefully towards their course to keep the pledge. The failure of our nation to have good international repute is the result of our newsmen not keeping the pledge.

Our political leaders, the ones who claim to have sacrificed themselves to serve the nation live a lifestyle far from sacrifice. They tell the people “we want to serve our nation” and pledge to serve but what the people get for supporting them is wanton destruction of lives and the gamble and warring in the national assembly. They think they are Nigeria when Nigeria is beyond their capacity to lead. Recent commotions in the National Assembly and House of Representatives are proof that the pledge was either misunderstood or never understood.

The nation’s religious leaders, the ones who the nation ran too for succor when disillusioned with political wrangling are easily the easiest culprits of the pledge. They who should stir their brethren on the need to see this “our Jerusalem and Mecca” prosper are the ones who show us how thoughtless the pledge could mean. They have become criminals in God’s house and their solace the nation once sought has lost value. They have lost that pledge they once asked God to help us serve.
The nation’s police force, kudos to them, but they it was that enforced the obedience of the pledge in public places. You dared not walk when that pledge was being said else you were considered unpatriotic and un-nationalistic. Now, the sad tale is they’ve now found a new genre of audacity. They stand on our public roads and make a mess of their service collecting money and bribes from motorist who should naturally be forced to observe the pledge. Our motorist no longer see the need for the pledge on our roads because they believe with the police, they could always have their way. It’s common to hear that criminals are backed by the unseen men of the force, a proof of how far the pledge has lost its value.

Our populace now thinks indifferent. To them the pledge no longer has value. They could choose to throw dirt and rubbish on the roads without second thought that it is their duty to keep their environment clean. They could choose to destroy the few available government amenities at will without second thought that it’s their own wealth they are destroying. They even fail to pay their taxes that should be the propellants for development because they do not know they have a made a pledge to have that done.
Our children are growing up without the pledge. It’s no more enforced in schools and they hardly know its meaning. They are growing with knowledge that they owe Nigeria nothing but Nigeria owes them. They are growing with the mentality that they only owe Nigeria when they intend to run for political position a now “for personal profit” service. They really need the pledge.

The National Youth Service Corps NYSC an arm of the government that once propelled unity is fast losing its bite. Our graduates want to stay home in familiar terrain because of the uncertainties that had always existed since the creation of the body. Our fathers had sacrificed even their lives because they pledge to serve Nigeria wherever they were called to serve. Our present generation are overtly scared a proof that they lack the propensity that comes with the pledge.

We have to pledge to Nigeria our country afresh, to be faithful, loyal and honest, to serve her with all our strength, to defend her unity and to uphold her honor and glory as God helps us.

Toolz, Tolu Oniru About To Get Engaged: OAP’s Boyfriend About To Propose To Her
Christ Embassy Church Members & Pastors Asked To Donate Money For Chris Oyakhilome Birthday