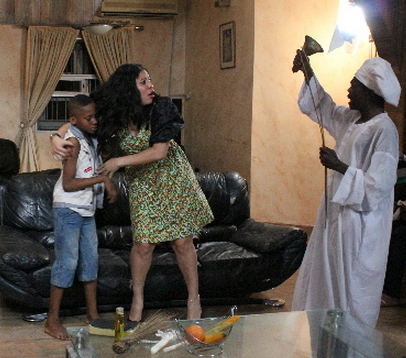 September 28, 2015 – Why Children With Autism Are Often Demonized In Nigeria – Tony Ogunlowo

I’m an Aspie – Get over it! An article by Tony Ogunlowo

Autism effects one in a hundred people in the United Kingdom, unfortunately there are no official figures for developing nations like Nigeria.

Autism is a lifelong mental disability which affects how the individual communicates and relates to people and the world around them.

When people hear the word ‘autism’ the first thing that comes to mind is the 1988 film ‘Rainman’ starring Tom Cruise and an awkward autistic played by Dustin Hoffman. Unfortunately when it comes to accuracy in portrayal of the character and events you can’t always trust Hollywood.

The Autistic Spectrum Disorder, or ASD, covers a wide range of disorders from Autism, Disintegrative Disorder,CDD;Pervasive Development Disorder,PDD to Aspergers Syndrome. Related to ASD is ADHD, Down Syndrome, Fragile X Syndrome, Epilepsy and Dyslexia. Well known Dyslexic sufferers such as Richard Branson and Jamie Oliver have shown that having a disorder proves no barrier to leading a happy, productive and successful life.

In the Western world children with autism are sent to special schools for gifted children where they can be taught to live with their disability and live productive lives.

The mere fact a child doesn’t speak until late, is dyslexic, disruptive, hyperactive or withdrawn does not necessarily mean the child is ‘possessed’.

Unfortunately, in Nigeria, children with autism are demonized; they are taken to churches to ‘exorcise’ their demons , thought to be witches or mad! They suffer the same kind of stigma as someone who is a lunatic, gay or suffers from Aids. In some extreme cases parents kill or try to kill their autistic offspring in the same way, in a begotten age, twins, albinos and deformed children were euthanized to avoid public shame.

Many parents still live in denial. They believe ASD can be cured. Autism is a lifelong disability and will never go away ( I should know, I’m over 50!) But rather than despair at the thought of having a ‘mad/lunatic’ child most parents will be surprised to learn that their autistic child is highly gifted and has the potential to be a genius and live a normal life – if properly nurtured.

It’s not exactly known how Autism forms in an individual; it’s not hereditary, it’s not a curse, it’s not transmitted from one human to another and it’s definitely not as a result of certain drugs a pregnant woman might or might have not taken. How some have it and others don’t is still a mystery and studies are ongoing, worldwide, to find out more about this disorder.

I suffer from a form of Autism called Asperger’s Syndrome( hence the nickname – ‘Aspie’). Unlike most other autism sufferers who have problems with speaking, learning difficulties and relating to the world around them, I do not.

Mine is referred to as a ‘hidden disability’ which is to say you wouldn’t know anything was wrong with me by my outward appearance.

An Aspie is a loner because he doesn’t feel the need to connect to a lot of people. He might have a few friends, but that’s it. They find communication equally difficult, or unnecessary, and will seldom call or email. I’ve been known to go AWOL for months – even years – to re-appear, as if nothing’s happened, to re- start a relationship from where I left off from! The need to live a reclusive lifestyle is paramount to an Aspie and only certain people, as need be, will be allowed in.

Socially an Aspie is very awkward. He’ll be the one sitting in a corner at a wedding, party or social get together eyeing the door with the hope of making a hasty exit ASAP! It’s a strain on the nerves to have so many people around him doing social things like talking, laughing, dancing and having a great time. It almost has a choking effect on the individual. An Aspie’s brain is not wired to deal with these things – it’s like a massive system overload – because it’s not logical. Grappling with the punchline to a joke or sarcasm can be very taxing on an Aspie. As a result social engagements will be avoided at all costs – if possible.

There will be the need to adhere to a strict regime. Routine is a keyword. Everything has to follow the same pattern and any diversion can make an Aspie feel like a fish out of water and can be very upsetting – it could be anything from walking the same route everyday, eating at the same time, precisely, everyday. Everything has to be routine with military precision as this becomes our only way of predicting or controlling events as they happen to us. In a sense because we’re able to outthink or outsmart situations with our lateral thinking, logic and routine means we can carry on even if Hell freezes over.

To round up the Aspie’s C.V there will be the weird habits – I’m known to go for late night walkabouts, have repetitive behaviour and can be downright annoying when I want to be( a feat that has lost me a lot of friends and acquaintances!) and my penchant for pacing up and down.

There will be the learning. We can never get enough of learning or processing information – thank God for Google! Accumulation of information is paramount to our existence. Our supercharged brains can’t get enough! We need more and more information and find ourselves absorbing even the most useless information others would normally disregard. It’s one of the reasons we’re lousy at making decisions because we have so much info to sift through! To crown it all an Aspie will have an intense interest in something that becomes an obsession – it could be a hobby or pastime – and they’ll strive not only to learn everything about it but to master it. As a result 99% of their time will be devoted to whatever it is they are up to and they can focus on it without any break in concentration.

I’ve had my fair share of problems for being who I am: I’ve been ostracized and alienated. There have been threats against my life – including spiritual attacks – and of course the name-calling – weirdo, loner, geek, nerd, recluse, nutter, madman and most recently Aspie.

Funny thing is Autistic are hard people to crack. We’re Teflon-coated and personally I don’t care what people think of me. Why? Because what I may lack as a ‘normal’ human being( – whatever that might be?) I make up for by possessing superior intellect and memory ( – but I’m still yet to get my PhD!) , I’m not a slave to incessant ‘human’ social and emotional problems, I can co-exist alone, live on minimal material comfort and see the world from a different perspective.

Now beat that if you can mere human beings!

I reckon I’m in good company!

2, The Autistic Spectrum by Lorna Wing.

4, The Autistic Brain by Temple Grandin and Richard Panek.

5, Pretending to be Normal by Liane Holliday Willey.

7, The Complete Guide to Asperger’s Syndrome by Tony Attwood.

Boko Haram, Bad Economy & Insecurity In Nigeria: Why Are We All Silent? By Preyor Tarel
Fulani Cattlemen & Farmers Clash Could Cause Food Scarcity In Nigeria – Bakare