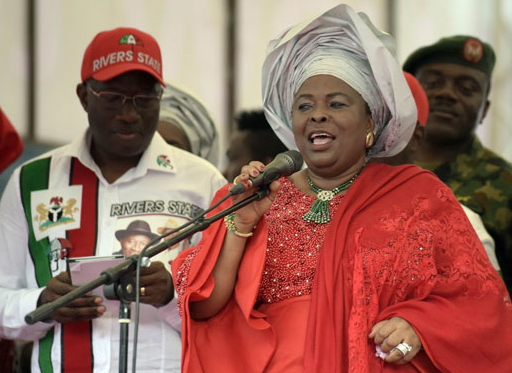 There are many elements of truth and facts in the article earlier posted on this forum and the allegations against former President Jonathan, his barbaric wife, some disappointed politicians in the region and those Niger Delta Avengers.

He also awarded billions of naira worth of pipelines security contracts to armed militants in the region thereby, making them financially powerful to initiate further attacks on Nigerian oil pumps and other costly oil infrastructures in the region. Why would any right minded president give billions of naira worth of contracts to illegal armed militants instead of empowering our offshore policemen, navy, and other security agencies with modern equipment and supplies?

Furthermore, Jonathan enjoys and completely ignores many threats to destabilize Nigeria if he loses reelection from Dokunbo Asari and other militants from the Niger Delta region as an incumbent running for reelection.

Dokunbo Asari issued uncountable threats to cause war and destabilize Nigerian peace far more than what Mr. Kanu Nnamdi issued that landed him in prison. Infact, Kanu did not issues 20% of what Alhaji Dokunbo and other militants issued but he was allowed to travel around the globe loaded with looted funds in term of oil contracts.

There was a time criminal Dokunbo Asari was arrested and sent to prison in Benin Republic, president Jonathon quickly intervened for his release from prison.

The next day, Dokunbo Asari was flown back to Abuja, Nigeria in presidential plane. That was so shameful and disgraceful all for reelection threats against the Nigerian people living outside the region.

I’m 100% sure that criminal Jonathan created the Niger Delta Avengers terrorist group to destabilize President Muhammadu Buhari’s administration and cause Nigerian people economy and her people pain due to reduction of oil revenue.

If there is an overwhelming evidence that Jonathan and his barbaric wife are part and parcel of the Niger Delta Avengers operations and the collateral damages that they have caused, President Buhari should order immediate arrest of that bastard and those behind the creation and financial support of this destructive group.

For a poor man who come from the minority of minority in Nigeria to be given opportunity by God Almighty and Nigerian people to serve as president for six good years, president Jonathan will be the most ungrateful and wicked vagabond in the world if he knows anything about this terrorist group attacking Nigerian infrastructures and causing drastic reduction in revenue.

If there is any concrete and good evidence that link criminal Jonathan with the Niger Delta Avengers, he should be arrested and detain with immediate effect, at that point, he has lost his privilege, statesmanship right and immunity as a former President for sponsoring Terrorists against the state and the Nigerian people.

There is God ooo.