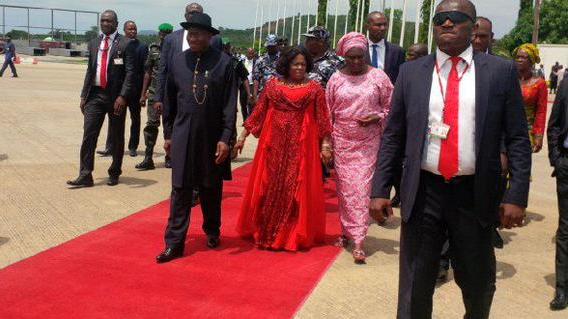 Mrs Jonathan, unlike other wives of Nigerian leaders was conspicuously absent from the inauguration of President Muhammadu Buhari.

Many have said that Mrs Jonathan who was last seen with her husband at the inauguration dinner which held Thursday night had through her body language showed her displeasure over her husband’s outster by the current President as she never looked at the direction of President Buhari who shared the same high-table with her throughout the dinner.

However, DAILY POST has gathered that it took the intervention of friends and family for the ousted First Lady to have agreed to follow her husband to the dinner. Her reason, according to a presidency source was that she may not be able to control her emotion as it’s painful giving up power just after one term in office.

The source further disclosed that Mrs Jonathan broke down in tears after the dinner last night and that could have been responsible for her absence from Friday’s inauguration as Mr. Jonathan may not want a repeat of the Thursday-dinner episode.

Meanwhile, Nigerians at different places have condemned her absence, saying that even though she has the right to stay away from any major event she is not directly involved, her absence at the inauguration communicates volume as to her grudge for the new administration of President Buhari and his wife whom she said she would work with and show direction.