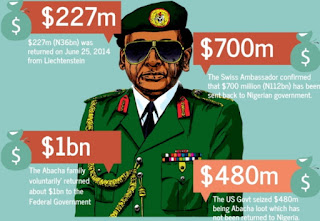 Before we begin to break our heads over what Donald Trump thinks or says about us, we should endeavour to ask ourselves a pertinent question. How do Nigerians perceive Nigeria? It will shock you to know that most Nigerians in their heart of hearts and despite protestations to the contrary believe that Nigeria is a shithole.

Nigerians played the American Diversity Visa Lottery for several years until they exhausted the quota numbers allotted to the country and were subsequently placed on the list of countries ineligible to apply by the US Immigration authorities.

Even while it lasted, some smart Alec quickly turned it into a profitable venture by setting up business centres to aid prospective applicants file their application papers. These are the same set of people who flock churches, mosques, prayer houses, shrines etc. and engage in all sorts of spiritual gymnastics in order to secure an American visa. We view anything foreign as superior to anything local therefore those who have been privileged to travel outside the shores of Nigeria are seen as superior homo sapiens which make many of them possess a superiority complex and an entitlement mentality.

A member of the political class once told me that the reason politicians stash their looted funds overseas is not because they want to keep it far away from the anti-graft agencies but because they secretly fear that Nigeria will implode someday and when it eventually happens they can have something to fall back upon. I believe this to be true because most Asian leaders who have been accused of corruption at one time or the other have most of their stolen money and investments in their home countries. This means that most Nigerian leaders secretly believe that Nigeria is a shithole which also explains why their wives and children practically live overseas while they govern us here in Nigeria.

The tales recounted by several Libya returnees on their return to Nigeria has revealed that Nigerians will do any and everything to get out of the country even if it means riding on camels across the desert and using financial resources which could have been used to set up a profitable business back home. What are they running from in Nigeria? And you say Nigeria is not a shithole?.

I know from personal experience that most Nigerians who live overseas are contributors to the negative image that Nigeria has internationally as they not only look down on their home country but also give a false an often exaggerated narrative of some of the challenges that bedevil our nation to their foreign friends which sometimes acts as a disincentive to foreigners either visiting or investing in our country.

Very few Nigerians who live overseas have houses or investments back home, fewer still have a retirement plan to settle in Nigeria apart from the monthly stipends that they send to their loved ones back home. Why can’t they behave like the Indians and the Chinese who invest in their home countries while living overseas and usually have no hopes of living forever in a foreign land?

Most Americans are ignorant about Africa and still believe that people in Africa live in huts and on trees. Some ridiculously believe that South Africa is the capital of Africa. I expect Donald Trump as President of America to have known better that.

Our problem is political correctness which is largely ingrained in the African culture. We know that Nigeria is indeed a shithole but we have a problem with the messenger (Trump) and not the message. After all, prominent Nigerians have used far more derogatory words to describe the country and they were not crucified. Come to think of it, what kind of words does the ordinary Nigerian use to describe their country in their everyday conversations?

Continue Reading
You may also like...
Related Topics:fun, loot, politicians

Bakare’s Ambition: Why A Genuine Pastor Should Understand The Consequence Of Thus Saith The Lord
Are You Worshipping God Or Your Pastor? Challenge To Christians Treating Church Leaders As Demigods