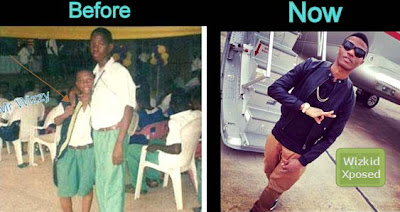 In an interview last year, Wizkid revealed his plans to go back to school for the completion of his education.

In another development, Wizkid’s ‘very ugly’ past has been exposed by his former secondary school class mates who claim the star singer was expelled from Ijebu Ode Grammar school in Ogun State for allegedly stealing the school property.

This is coming after a breach of contract scandal by the popular singer.

His ex-schoolmates claim they paid him to perform at a concert but he refused to show up.

Olumide Adewale and Adetunji Adekokun have both launched a serious war against Wizzy.

The angry men said this is not the first time Wizkid will be involved in a scam of this nature.

Both Wizkid and his manager are yet to officially respond to these allegations.

Last month, University of Lagos student forced police to arrest Wizkid after an impersonator allegedly took 500 thousands naira from them for a concert.

This story is just developing.

We await Wizkid’s side of the story before any further comment.