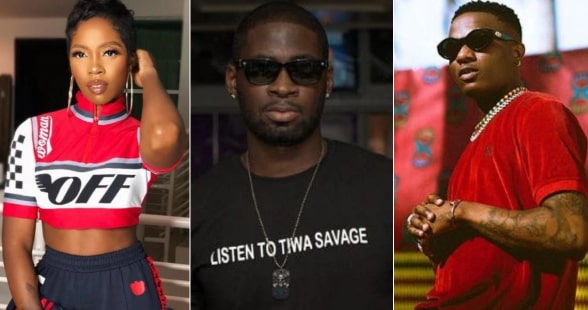 Nigerian pop music star, Wizkid, dropped a controversial music video, Fever, featuring Tiwa Savage earlier today. The video is currently the most trending news piece in Nigeria. While the music duo, who share some form of chemistry between them, appear to be the winners, there is one obvious loser; Tiwa Savage‘s estranged husband, TeeBillz, who has always made obvious his desire to gain back the love of Tiwa Savage, would not be impressed with the trending music video.

It would be recalled that, over the past few months, there have been rumours of a romantic relationship between Starboy and screen diva, Tiwa Savage. The pair has grown so close, to the point of having alleged amorous feelings toward each other. They’ve been seen hanging out together, in a couple-like manner, at several locations around the world. In fact, they even shared a passionate kiss on stage at a music concert. The “kissing” incident appeared to validate the rumours going round. However, TeeBillz came out to calm frayed nerves.

In an Instagram post, TeeBillz described Ayo (Wizkid) as his little brother. He further stressed that, Wizkid wouldn’t want to “cross” him by getting romantically involved with Tiwa Savage – his estranged wife. His social media proclamation or should I say rant was effective, as the rumours of Wizkid’s romantic affair with Tiwa Savage gradually died down afterwards. However, a month later, TeeBillz’s social media rant seems to have lost its efficacy.

The music video was released by Wizkid in the early hours of Wednesday, October 24, 2018. The video illustrates the romantic side of two lovers. In the music video, the half-clad Tiwa Savage was seen passionately romancing the shirtless Wizkid on the bed. The music stars’ make-believe romance in Fever appears too explicit to be “just a video”.

Furthermore, the trending music video, Fever, has sparked serious controversies; generating another round of rumours alleging Wizkid of dating Tiwa Savage, with stronger magnitude this time around. In the midst of these controversies, Teebillz has been on the receiving end of Nigerian social media trolls.

Will “Fever” eliminates any hope of Tiwa Savage getting back together with her estranged husband? Only time will tell. Let us take a quick peek into the life of the ex-lovebirds when the going was good and how their union spiralled out of control.

Tiwatope Savage, fondly called Tiwa Savage, got married to Tunji Balogun, TeeBillz, on 26th April, 2014. Their wedding was an elaborate event which held in the Emirates city of Dubai. The event is probably one of the most elaborate events involving Nigerian entertainers.

At this time, TeeBillz doubles as Tiwa’s career manager. He practically singlehandedly brought her home from the United Kingdoms and ignited her music career in the Nigerian music industry. Their union blossomed and it became every couple’s wish. About a year down the line, Tiwa Savage gave birth to a bouncing baby boy named Jamil.

In April, 2016, which was exactly two years after Tiwa Savage and TeeBillz’s grand wedding, crisis struck; the power couple got involved in a highly unexpected social media brawl, which eventually resulted in their unfortunate separation.

TeeBillz threw the first Social Media jab, when he accused his estranged wife, Tiwa Savage, of being a witch and an adulterer. As a showbiz star, Tiwa Savage took it one step better; she appeared on live television to make some very shocking revelations about TeeBillz and their marriage.

In her 45-minute TV interview, Tiwa Savage accused TeeBillz of infidelity and drug abuse. She further accused TeeBillz of financial irresponsibility, when she claimed she’s the one striving to pay off TeeBillz’s debt and also funding his lavish lifestyle.

The crisis hit rock bottom, with TeeBillz’s alleged suicide attempt. He was reportedly rescued by his friend; popular Nigerian musician, Banky W. It was later gathered that, Banky W provided him with accommodation and paid for his therapy consultation. In a nutshell, Banky W saved TeeBillz from his suicidal thoughts and tendencies.

About a year after TeeBillz and Tiwa Savage’s separation, in March 2017,they reportedly filed for divorce. However, till today, it is yet to get a hearing date in court.

Barely a year after the crash of his marriage, TeeBillz was invited as a special guest to an event, which was aimed at addressing the issue of failed marriages in the twenty-first century. While speaking at the event, he pointed out the lack of certain ingredients in his marriage, which eventually resulted in its unfortunate crash.

TeeBillz attributed the crash of his marriage to lack of communication and understanding, as well as selfishness on his part. He went further by stating that, if he is given another opportunity, to redeem himself and get remarried to Tiwa Savage, he wouldn’t agree to a lavish wedding but rather settle for a low-key wedding and seek God’s blessing. This means that, he’s obviously seeking to get back together with Tiwa Savage.

The possibility of their reunion has gained strength in the past few months. Earlier this year, Tiwa Savage sent his blessings to TeeBillz and credited him for bringing her out of loneliness and wilderness into the limelight. This singular act on social media went a long way in raising people’s hopes, on the estranged couple’s reunion.

Furthermore, a couple of weeks back, Tiwa Savage posted a cryptic message on Instagram, where she illustrated that she was missing someone, by showing off her “I Miss U” face. Her post was subtly interpreted to mean she’s missing no one other than TeeBillz.

TeeBillz, on the other hand, who is currently on social media sabbatical, has not shied off on his desires to get back with his estranged wife. He is known to throw out the love emojis (on Social Media) at Tiwa Savage, at every single opportunity he’s gotten. He is, without doubt, making strong efforts to get back into the life of Tiwa Savage, his estranged wife and mother of his kid, Jamil.

Wizkid in the Middle

While TeeBillz has expressed his confidence and trust in Wizkid and Tiwa Savage, with respect to the rumours going round, the recent development has propelled the rumours to new heights. Is the newly released music video just a video or something else? I guess no one is ready to answer that. One thing is, however, certain; whatever the video portrays, TeeBillz wouldn’t be impressed.

Tiwa Savage has since provided a soothing sensation to the heat generated by the controversial music video. In her words, she claimed that, her relationship is not up for public discussion and it is strictly her business and that of her partner.

Could the partner be TeeBillz or Wizkid? We’ll find out soon enough. In the meantime, fingers crossed!.