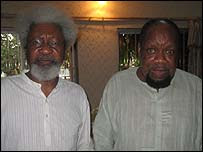 December 10, 2015 – Wole Soyinka: Biafra Is An Idea That Dare Not Challenge The Sovereignty Of Nigeria

Nobel Laureate, Prof Wole Soyinka, yesterday spoke frankly on the agitation in the South East and declared that Biafra cannot be defeated.

Soyinka added that the agitation did not come to him as a surprise.

He also defended his choice of President Muhammadu Buhari as a better candidate, in the last presidential contest between him and former president Goodluck Jonathan.

Speaking on Channels Television last night, Soyinka said agitation for Biafra will never go away as Biafra is an idea.

He said: “I remember I wrote an article during the war and I said at that time that Biafra cannot be defeated. People misunderstood what I was saying. I said once an idea has taken hold, you cannot destroy that idea. You may destroy the people that carry the idea on the battlefield, but, ultimately, it is not the end of the story.”

He said instead of government issuing threats to Biafran agitators, it should rather go to the South East and find out why they are agitating for another country and see what it could do to remedy the situation.

“Go into that environment and ask what are those things we can do to make you content, to make you feel part of this entity. Listen to some other Biafrans and ask them why they want to stay. But, don’t go around saying ‘the sovereignty of this country is indivisible, it is not negotiable.’ That type of language would only make matters worse,” Soyinka said.

He added that the agitation for Biafra has made it imperative for Nigerians to take yet another look at restructuring the country.

On Buhari’s election, Soyinka said his preference for the president, during electioneering, was borne out of his conviction that he was a better candidate. He said the situation in the country was such that he reckoned that another four years of Jonathan could be disastrous for the country.

“At that time, we had reached the bottom. I believed that if the country underwent another four years under Jonathan, we could be in trouble. I then looked at Buhari. I talked to people They said he had changed.”

He said he had weighed the options, knowing that the negatives on Buhari were his excesses.

“I don’t like people who just jail others. Very reluctantly, I weighed the option and was convinced that the country would be better under Buhari,” he said.

The Nobel Laureate said his conviction was based on the fact that Buhari could not be worse than Abacha, declaring: “I said if he deviated, we will fight him. Look at what is coming out , the rot. You can see we didn’t make a mistake.”