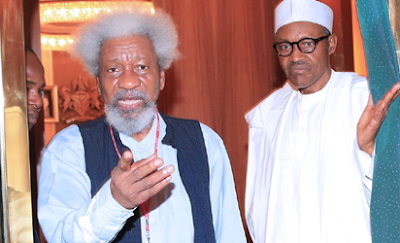 The Nobel laureate in a statement released yesterday recalled how Buhari promised to deal with the situation during a similar fuel crisis in 1977.

Soyinka attached a news headline where Buhari promised to end fuel scarcity in 1978 to the statement titled Blame Passing. 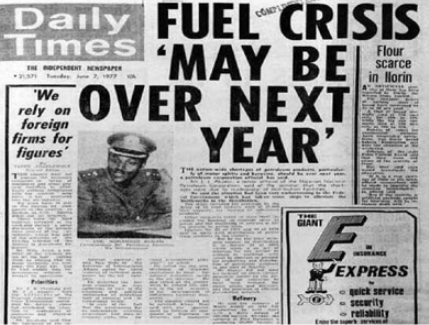 “In the accustomed tradition, I wish the nation less misery in the coming year. A genuine Happy New Year Greeting is probably too extravagant a wish.

“The accompanying news clipping from June 1977 came into my hands quite fortuitously. It is forty years old. It captures the unenviable enigma that is the Nigerian nation. It is however a masterful end-of-year image to take into the coming year, not only for the individual now at the helm of government, General Buhari, but for a people surely credited with the most astounding degree of patience and forbearance on the African continent – except of course among themselves, when they turn into predatory fiends. When many of us are blissfully departed, an updated rendition of this same clipping – with a change of cast here and there – will undoubtedly be reproduced in the media, with the same alibis, the same in-built panacea of blame passing.

“Let this be called to our collective memory. Even before the current edition of the fuel crisis, other challenges, requiring immediate fix, had begun to monopolize national attention, relegating to the sidelines the outcry for a fundamental and holistic approach to the wearisome cycle of citizen trauma. “This has been expressed most recently, and near universally in the word “Restructuring”, defined straightforwardly as a drastic overhaul of Nigerian articles of co-existence in a more rational, equitable and decentralized manner.

“Such an overhaul, the re-positioning of the relationship between the parts and the whole offers, it has been strongly argued, prospects of a closer governance awareness of, and responsiveness to citizen entitlement. An overhaul that will near totally eliminate the frequent spasms of systemic malfunctioning that are in-built into the present protocols of national association.

“I recently ran the gauntlet of petroleum queues through three conveniently situated cities – Lagos, Abeokuta and Ibadan – deliberately, this Friday.

“Even with ‘unorthodox’ aids of passage, this was no task for the faint-hearted. Just getting past fuelling stations was traumatizing, an obstacle race through seething, frustrated masses of humanity, only to find ourselves on vast stretches of emptied roads pleading for occupation.

“As for obtaining the petroleum in the first place – the less said the better. I suspect that this government has permitted itself to be fooled by the peace of those empty streets, but also by the orderly, patient, long-suffering queues that are admittedly prevalent in the city centres.

“It is time the reporting monitors of government move to city peripheries and sometimes even some other inner urban sectors, such as Ikeja and Maryland from time to time to see, and listen! Pronouncements – such as the 1977 above – again re-echoing by rote in 2017– are a delusion at best, a formula that derides public intelligence.

“Buying time. Passing blame. Yes of course, the current affliction must be remedied, and fast, but is there a dimension to it that must be brought to the fore, simultaneously and forcefully? This had better be the framework for solving even a shortage that virtually paralyzed the nation.

“Just to think laterally for a moment – what became of the initiatives by some states nearly two decades ago – Lagos most prominently – to decentralize power, and thus empower states to generate and distribute their own energy requirements? Frustrated and eventually sabotaged in the most cynical manner from the Federal centre!

“The similarity today is frightening – for nearly four days on that earlier occasion, the nation was blacked out near entirely. We know that one survival tactic of governments is to keep their citizens in the dark over decisions that affect their lives but, this was literal!

“And yet each such crisis, plus lesser ones, merely reiterate again and again that this national contraption, as it now stands, is simply – dysfunctional!.

“What this demands is that, in the process of alleviating the immediate pressing misery, we do not permit ourselves to be manipulated yet again into forgetting the MAIN issue whose ramifications exact penalties such as petroleum seizures and national power outage.

“These are only two handy, being recent symptoms – there are several others, but this is not intended to be a catalogue of woes. Sufficient to draw attention to the Yoruba saying that goes: Won ni, Amukun, eru e wo. Oun ni, at’isale ni. Translation: Some voices alerted the K-Legged porter to the dangerous tilt of the load on his head. His response was – Thank you, but the problem actually resides in the legs.

“The providential image above sums up a defining moment for both individual and collective self-assessment, places in question the ability of a nation to profit from past experience. Vast resources, yes, but proved unmanageable under its present structural arrangements.

“As the tussle for the next round of power gets hotter in the coming year, the electorate will again be manipulated into losing sight of the BASE ISSUE.

“Its noisome claque in the meantime, the automated mumus of social media, practiced in sterile deflection and trivialization of critical issues, unwittingly join hands with government to indulge in blame passing and name calling – both sides with different targets.

“From the anguished cry of Charley Boy’s Our Mummu Done Do! to expositions from academics such as Professor Makinde’s recent intervention, the public is subjected daily to a relentless barrage of awareness, underlined in urgency. Nobody listens.

“One wonders if many people read. And certainly, very few retain or relate – until of course the next crisis. The Labour movement declares that it awaits a guarantee of the ‘people’s backing’ before it embarks on any critical intervention.

“Understandably. There is more than enough of the opium of blame passing on tap to lull mummus into that deep coma from which – give it a little more time – there can only be a rude awakening.

“Sooner than later, but not as soon as pledged, the fuel crisis will pass. And then of course we shall await the next round of shortages, then a recommencement of blame passing. What will be the commodity this time – food perhaps?

“Maybe even potable water? In a nation of plenty, nothing is beyond eventual shortage – except of course, the commonplace endowment of pre-emptive planning and methodical execution. Forty years after, the same language of re-assurance? “There is something rotten in the state of Naija.”

Omotola Jalade: I Started Hustling At 15 To Take Care Of My Brothers & Mother
Happy New Year! Welcome To 2018