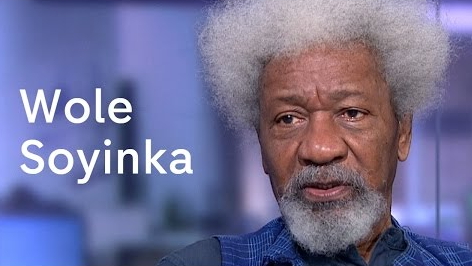 November 12, 2016 – Wole Soyinka Blasts Donald Trump For Being Racist, Comes After Nigerians Insulting Him Over Plan To Tear His American Green Card

WolexIt, an article By Wole Soyinka

I was in New York during the run-up to elections. I watched this face, its body language, listened to his uncouth, racist language, his imbecilic harangues, the insults to other peoples, other races, especially the Hispanics, Africans and Afro-Americans, even citing once – I was told – Nigeria as an instance of the burdensome occupation of global space. I watched and listened, disbelievingly, since this was America, supposedly now freed to a large extent – as we like to believe and have a right to expect – from its lamentable history of racism. But I saw, not only this would-be president but – enthusing followers on populist a populist roll at the expense of minorities! I followed the fluctuating poll statistics. I began to warn my colleagues, friends, my family: listen, this thing is happening right before our very eyes. This is how it begins, how humanity ends up with Cambodia, with Rwanda, with Da’esh. We are watching a Hitlerite phenomenon.

We are witnessing history in reverse, unravelling before a complacent world. I said to them, if this man wins, I am relocating. It had gone beyond a joke. They all said, it will never happen. Even a day to elections, some Nigerians, with whom I had a meeting in New York, waved off the possibility. The entire world goofed – T.B. Joshua and other pundits, charlatans and experts alike. A colleague at Harvard mentioned the celebrations that would follow the election, but shortly after, confessed his concerns, cursing the FBI man who had chosen to intervene at an unprecedented stage in the elections.
Again, I said to him, I shall relocate if Trump wins. He said, I’m coming with you, echoing numerous other colleagues to whom I had sounded the same alert. I promised them all political asylum! So, it was nothing new, the Oxford comment. Whatever language I used is my familiar language, not the language of Da’esh or its local impotent surrogates.

Finally, here is something very personal, but I have to answer the question of my genuine interlocutors in matching sincerity.

Our US base and family home in California – Abacha instigated – faces a rockhill known as Mount Baldy. It has survived the menace of fires, so close to disaster that we were placed on evacuation alert a number of times and were once actually bundled out by the police for over forty-eight hours. A fireball overflew the house on one occasion, landed some distance from ours and consumed that unlucky home. Not too far away, an escaping family took a wrong turn and lost their lives in the flames. Nothing of such menacing interludes ever brought to the fore the remotest consideration of relocating! However – and let this be stressed to all those who are strangers to the world of images – for this individual called Wole Soyinka, the superimposition of the Trumpian face on those bare mountain slabs began to take on reality, a reality that probably became even three-dimensional, like the massive faces of those former US presidents that remain gouged into the peaks of Mount Rushmore in South Dakota, visited by millions. My environment, albeit a substitute one for our authentic home in the forests of Ijegba – had become compromised. That is all I shall write on the reality of superimposition – the notion of waking up every day of habitation and seeing on that mountain slab the face of Donald Trump on my borrowed preserve, where, from upstairs, I sometimes stood in bouts of contemplation, especially whenever the house was empty.

For me, something is gone. Again, I speak for myself, not for my family who are, in any case, also American citizens, an acquisition that I have declined I cannot recall how often. Let me repeat, even that portion of empathy that comes from intimate occupancy and usage over the years, and where the products of my ”extra mileage” were born, has become violated. It is still home, second home, but one individual named Donald Trump – and his cohorts – have ruined its hard-earned companionship and serenity, built up over the years. As I keep repeating, these issues are personal.

And so, back from our quick excursions to Asia and the Antipodes, what is so special about America that an agenda of abandonment creates such hysteria? I am incapable of double standards in these matters. Why do individuals feel threatened? I have never invited anyone to join me in my purely personal odyssey, begun before most of these sniveling upstarts were born. Is it the Green Card that sets America apart? Then perhaps it is time to repay the compliment with a Red card, as in soccer. I am not aware that the world’s oxygen storage tanks are located in the US of A, so that we cannot breathe away from it. I shall always compliment the American success story on many fronts, including the fact that millions of migrants derive their very living – including crucial send-home remittances – from her generosity. Many of us will always be grateful to her government at the time for sheltering both our persons and our mission during the Abacha years. However, we are also individuals, with specific needs, different sensibilities, and definitions of productive environments and thus, up to this moment, my Wolexit stands.

It is a personal thing. Perhaps it will help even further if I remind you of what I wrote in my memoirs: YOU MUST SET FORTH AT DAWN. There I confessed that my greatest – and irrational – fear in exile was that if I died outside Nigeria, my well-meaning family, colleagues and friends, would bring my body home. I took firm steps. The thought of resting within that earth while it was trampled over by a despotic monster whom I thoroughly despised, was the absurd but all-consuming fear that I had all through that deadly struggle. Obviously that fear has been eliminated, but then, having watched this American Wonder rise to power through a contemptible denigration of my sector of humanity, through mockery and jeers of my origin, I no longer find that environment congenial either for work or leisure, and I have signalled my unambiguous intent to exit. No one else is invited.

Well now, a remarkable development. I stated earlier that the issue is not just one individual called Donald Trump, but the human environment that he and his ilk have spawned, one that contributes to a toxic environment across the globe, with the rise of ultra-nationalism and exclusionist politics. That environment is however engendering counter aspects to that created by Trump’s lowest common demonimator in followership. Spontaneous protests have sprung up across the country. Too late, I’m afraid, and ineffectual, since Democracy has the last word, and its rituals have been concluded. The law of the land will prevail. However, I have been considerably cheered by the spontaneous manifestation of this rejection of the shame and horror that a ”majority” has imposed on the totality. Americans will have to live with it, but there is hope. Even before the street protests, something rather strange had taken place.

On the very morning of the conclusion of elections when I switched away from one news channel to the next, the screen went suddenly blank. Then came a scrolled message that called for a quiet, peaceful revolution. It went on and on, without voice or images, and it was non-partisan, since it rejected not only Trump but Clinton as befitting candidates but declared American democracy a sham. It went on to complicate matters by identifying an individual – Bernie Saunders – by name as an acceptable leader of a new movement. It excoriated past governance policies, dismissed even Obamacare as a failure – I disagree by the way – and urged viewers again and again to LET’S TALK ABOUT IT. LET’S MEET ON THE INTERNET. LET A PEACEFUL REVOLUTION BEGIN etc. etc. It could have been Channel 33 or 34, I am no longer sure. A serious, viable movement? Maybe not sustainable under the present system, but it goes into that multi-faceted network that leads to the eventual sanitization of any socio-political environment. And then, latest of the latest, the state of California has mounted a referendum for secession, within her constitutional rights. Quite an unpredictable prospect but, much as I am predisposed to upheavals by vox populi, I prefer to be out of the environment, being a non-citizen.

Let me end with a Red Card to those noisome creatures, the nattering nit-wits of Internet: maybe Trumpland is not as despicable as the Naijaland you impose on our reality from your secure cesspits of anonymity. Go back to school. Your problem is ignorance, ignorance of whatever subject you so readily comment upon. Learn to study your subject before opening up on issues beyond your grasp. Sometimes you make one feel like swapping one green for another, out of embarrassment for occupying the same national space as you.

But don’t get nervous, or start jumping for joy too soon – the Nigerian passport is just as tough to rip, physically, as is the Green Card, so I’ll stay put in my private Green Belt – the one I have named the Autonomous Republic of Ijegba. I negotiate my relations with both peoples and nations from its internal protocols – yes, that is indeed arrogance for you, but an arrogance of several decades’ principled growth.

I carry that patch of green with me, everywhere, in a secure, invisible, and inaccessible pouch! It is that warehouse of ingrained sensibilities that engendered my decision.